Murray Flay in one of the raspberry polytunnels. Photo: Catherine Fry

Te Awamutu berry farmer Murray Flay knew when he left school that he didn’t want to follow in his father’s footsteps and be a dairy farmer.

Instead, he spent a year on a sheep farm and two years at Lincoln College, before being drawn into horticulture when his father, Gaidyn, diversified into berries at the end of the 70s.

“We’d had a 40-hectare run-off block down the road from our main farm as a run-off and we grew maize there through the 70s, and used it for winter grazing, hay and silage,” says Murray.

With it’s free draining, silt loam soils, and flat contour, the run-off was suitable for a berry growing venture, and Gaidyn started off with strawberries and boysenberries. Murray joined him in 1980 and after 25 years in partnership, took over the operation.

“I loved growing things and saw a great opportunity there.”

Throughout the 80s, the pair reduced the maize growing and expanded the berry side. They stopped growing strawberries, as the area is susceptible to late frosts, and can be too wet in the spring.

“The peak of the strawberry season also clashed with the time the boysenberries needed the most attention, causing a very high workload.”

They turned their attention to growing raspberries, boysenberries, and blackberries, which Murray still grows today.

These bramble fruits need training over post and wire frames. During the winter, Murray has around 12 staff who work through until August.

“Most brambles produce fruit on the one-year-old canes, so during the winter we prune out all of the spent canes and train the new canes onto the wires ready for the new season.”

Autumn raspberries are the exception to this and fruit from the current year’s growth.

Spring is when most of the staff have a break, with four of the full-time staff remaining. During spring, the new growth is sprayed for leaf roller and bud moth, and fertiliser is applied after soil testing.

“The berries need nitrogen and potassium, but not much phosphorus.”

Some orchards have two metre grass strips between the berry rows, but Murray’s orchard has three metre strips because that is how they were initially placed, and all their tractors and machinery fit that width.

“We have to spray with fungicide during flowering, to protect against downy mildew and botrytis fungi.” 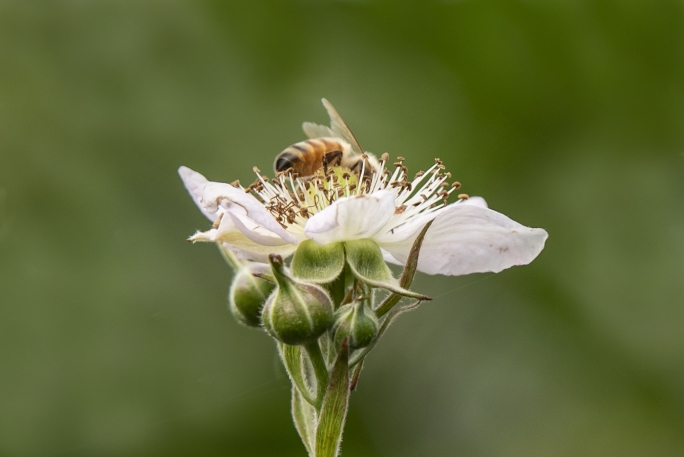 The orchard depends on natural pollination by bees, and the orchard has a few beehives. Nowadays, Murray says they are lucky enough to have several neighbouring properties with bees, that come to the brambles.

While birds seem to get the majority of the berries when we try and grow them in a backyard, it is less of an issue than one might think in a commercial setting.

“Most of the birds that want the berries are too heavy to land on the flimsy plants, so they fly at the bush and hope for the best. Sometimes a berry drops, but usually they just get a bite.”

The pickers discard bird bitten berries on the ground, so the birds get them that way. Murray says there’s enough to go round for birds and people, without it impacting the crop to any great significance. 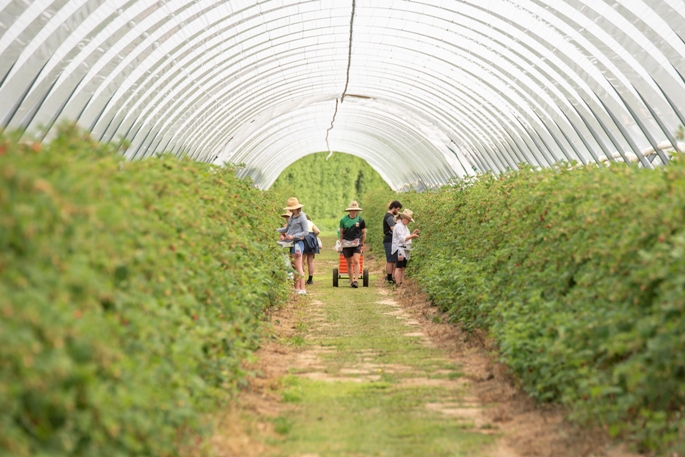 Seasonal workers at the start of the raspberry picking season. Photo: Catherine Fry

“We start picking fruit in late November and then it’s full on, with around 80 seasonal staff working. We take Christmas Day off, and sometimes New Year’s Day, and that’s it. The berries don’t stop ripening because it’s a holiday period!”

To meet the Christmas demand, raspberries are grown in long polytunnels, complete with automatic irrigation systems. Fertiliser is added to the water for an all-in-one application via drip irrigation. The raspberries are handpicked as when pulled, their core remains on the plant, making the fruit very delicate.

The boysenberries ripen from mid-December to early January and are half hand-picked and half machine picked during the peak.

“The boysenberries are picked with their core intact, so are less fragile than raspberries and we can use our harvester. We hand pick the fresh berries, and machine harvest for our purée berries.” 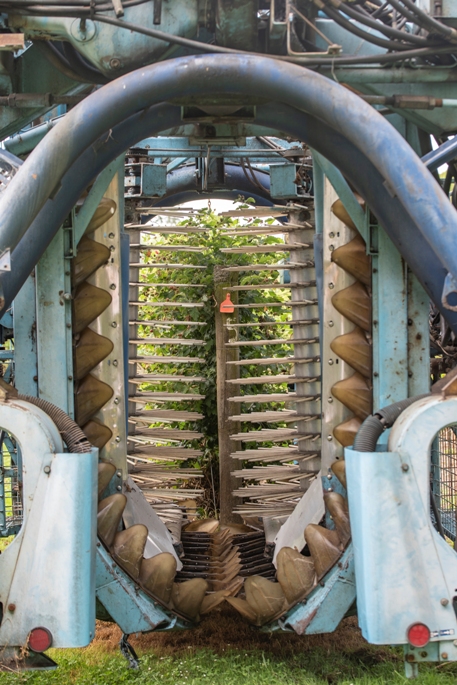 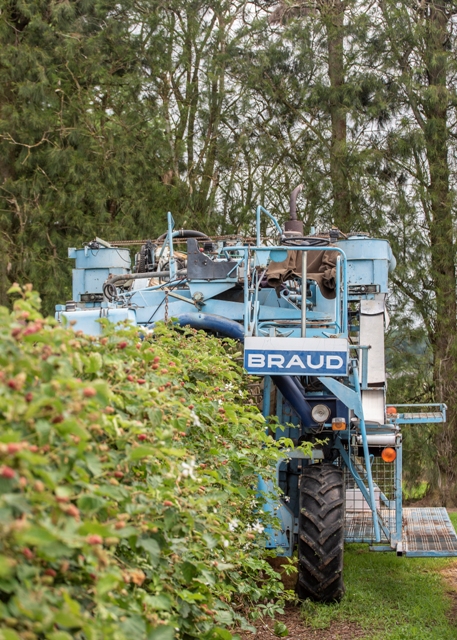 The harvester is an unusual looking, modified grape picker, which Murray bought from a local grower. The French made, Braud machine sits astride the row of canes and is driven slowly forward.

As the shakers vibrate, the ripe berries fall off onto the machine. Two staff are on each side of the tractor body, hand grading the fruit as it comes down. The unripe berries remain on the bush, totally undamaged.

“We’ve got machinery onsite for puréeing the fruit which is then used for products like yoghurts and ice cream. We can also blast freeze berries onsite and package as free-flow frozen berries.”

The blackberries are the last to fruit in the summer, but Murray grows autumn fruiting varieties of blackberries and raspberries.

“Then the cycle starts all over again as we go into winter,” says Murray.