A family of bee keepers

“Running your own bee-keeping business only becomes viable when you have a minimum of 500 hives,” says Black Shepherd Apiaries owner, Ben Stinson.

Ben and his wife Robyn went through the rather manic process of building up their own hive numbers, while Ben worked full time and Robyn looked after their two small children.

“I’ve worked with bees for 12 years after a summer holiday job that I never left.

“It’s always been a dream to run my own business,” says Ben.

Robyn is a fashion designer, known for opening the Cambridge designer clothing store Ooby Ryn, where she sold her designs. She is now happily a full time mum to Kiedis, 4, and Juno, 2, combined with using her creative skills to brand and market Black Shepherd Apiaries.

The business name is after the family’s much loved black German Shepherd, Pebbles. Using the word Apiaries was something the couple kept coming back to before finally settling on it as “it has a nice ring”.

“We started in January 2018, still living in our town house and putting hives on other people’s land as we built the numbers up,” says Ben.

“We sold our first jar of honey, which was Rewarewa, in December 2018 and it tasted fantastic,” says Robyn.

While their honey can be processed at Ohaupo Apiary, where it is extracted, packed and stored, the couple’s dream is to bring that process to a property of their own.

They bought a suitable two acre property in Horahora, south of Cambridge, in September 2020.

It had the perfect shedding set up for them, and a 1920s Californian Bungalow which the family has fallen in love with.

MPI and Assure Quality certification will be required first. Then they will be able to pack for small bee keeping businesses and hobby bee keepers, as well as themselves.

At the moment Ben and Robyn are happy to just consolidate their business, and even though they have had “quite a fast start”, the financial outlay to be able to extract at home is a large one.

“It’s a big leap for a business that is so weather dependent, so we’d like to take our time,” says Ben.

At the moment the business is run by just Robyn and Ben, with Ben doing all the physical work.

“It’s fine as I’m still young, but as I get older I will find all the heavy lifting harder, and by then I’d like to have staff to do the heavier work,” says Ben.

As the business grows it will become too big for one man, so they will be looking at offering a bee-keeping apprenticeship for a keen bee keeper out there, and teaching someone to work how Ben does.

“It’s nothing major, but when you’ve been in the business a while, you know how you like to do things,” says Ben.

From October to February, Ben works long hours moving hives up to Northland at first, and then working south to catch the Manuka as it flowers down the country as far as Taihape.

It takes a couple of months to bring the hives back to local land and ensure the bees have enough food for the winter. Through May, June and July, the hives are regularly checked, and Ben carries out maintenance and builds new hive boxes.

The Stinsons use an Italian strain of honey bee that is a little more orange in colour than regular honey bees and a better temperament.

“Ben breeds his own queens now and he takes the time to breed with non-aggressive traits.

“They’re pretty calm, but he still gets stung at least once most days!” says Robyn.

“We really hope we have a business to pass down to the children,” says Ben.

The couple export to Malaysia already and would like to increase their local and export market. They aim to ensure their business has a low carbon footprint.

“We have a refill system, which we take to the Tamahere market and is also available in Fill Good, Cambridge, where the consumer can fill any jar of their choice,” says Robyn.

Robyn started their innovative fundraising initiative, where instead of the usual chocolate or pies, schools, clubs and organisations can sell Black Shepherd Apiaries honey, and retain 40 per cent of the profit.

At present there are no plans to make products other than honey and beeswax candles, and they are thankful each day for the life they have built for themselves with their own hard work. 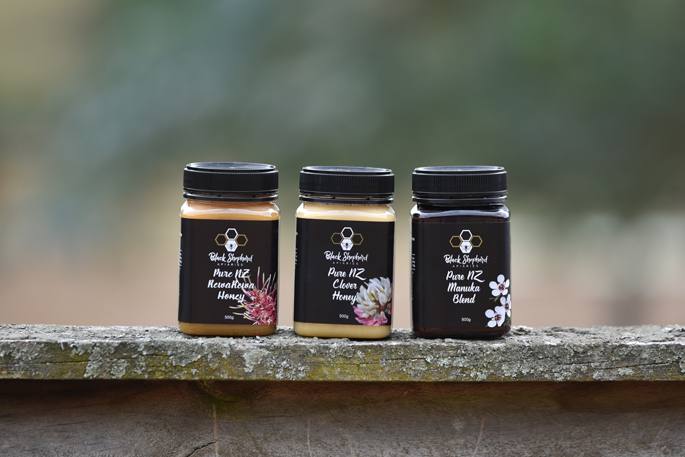