Alpaca breeders Dave and Sonja Blom, with some of their coloured herd.

South African couple Dave and Sonja Blom came to New Zealand in 2005 seeking a securer lifestyle for their family.

Dave, a dentist by trade, comes from a family of farmers, and the couple themselves farmed in South Africa for five years, breeding Nguni – a hardy African beef cattle with gorgeous hides.

They began farming alpacas in New Zealand in 2006, with four females and a cria (baby alpaca) on a four-acre lifestyle block off State Highway 23 near Raglan.

Today their alpaca stud has 160 alpacas between their 10-acres in Gordonton and a neighbouring leased block of 15 acres.

While Dave loves the little humming noise the animal makes to communicate, Sonja fell in love with their sweet natures, hollow wool, known as alpaca fibre, which appealed to her creative nature.

“Their fibre is three times warmer than sheep’s wool, very durable and strong, and beautiful to work with,” says Sonja, who was a self-professed city girl, music teacher, and university lecturer in educational psychology. Using colourful dyes and felting techniques, Sonja makes stunning scarves from the fibre. Alpacas are farmed mainly for their fibre, and sometimes for meat in New Zealand.

The couple have around 28 flat paddocks of varying sizes, and paddock rotation can stretch out to a week in summer and reduce to three days in winter. Alpacas eat the grass very low, avoiding weeds, and have a communal “poop patch” that they eat around.

Additions of lime or seaweed granules are applied as needed after each year’s soil testing.

The pastures are sown with horse mix, as rye grass gives the alpacas rye grass staggers. Supplements include meadow hay, and alpaca and lucerne pellets, which are infused with minerals and vitamins.

“We sometimes add Vitamin B12, and the crias get regular Vitamin A, D and E from age six weeks to two years,” says Dave.

While the alpaca is fairly self-sufficient, they can be bothered by worms and require twice-yearly drenching. The alpacas receive the same yearly 5-in-1 vaccination as sheep. But they are very susceptible to facial eczema, and unlike sheep, show little visible symptoms.

“We opt for prevention with pasture spore count testing from January, and zinc in both the water and lucerne pellets as required,” says Dave.

The herd of huacaya alpacas includes 100 breeding females split into five smaller herds, each with a stud male, and this season’s crias. Around 50 per cent of the alpacas are white or the lighter fawns, as the fibre from these colours can be dyed most easily.

The rest vary from pure black, through all shades of fawn and brown, to silver grey and rose grey. “There are 22 recorded natural colours,” says Sonja.

The Bloms breed for specific fibre traits, including fineness, density, lustre and shine. Every three years replacement stud males are sourced from other NZ alpaca studs, and imported as live animals from Chile, Peru, the US and Australia.

“We take great care to keep the gene pool fresh, and we have a high success rate with our breeding,” says Dave.

Alpacas are sexually mature from the age of two, and females can breed for around 20 years. “It’s a slow process with a gestation period of 11-and-a-half months, and the crias stay on their mothers until they are five months old,” says Sonja.

Female alpacas do not have a specific breeding cycle, but are ‘induced ovulators’. The physical act of mating and the stud’s orgling noise induces ovulation.

To give crias the best start in life, Dave and Sonja keep stud males away from females for some of the year, to try and schedule births to fall outside the coldest and hottest months.

“We are part of the Alpaca Association of New Zealand, with 90 per cent of our herd registered,” says Dave. Showing their alpacas is part of farm life, with several champions to their name, such as the grey stud male, Lord Grey, and the fawn stud male, Invincible.

The Bloms are contract suppliers to Pacific Alpacas in Cromwell, where the fleeces are used for duvets. “We also keep some ourselves for felting and making other products,” says Sonja.

It is easy to see why the silky, soft fibre is a popular choice today as an alternative to sheep wool. For more information, see: www.cornerstonestud.co.nz 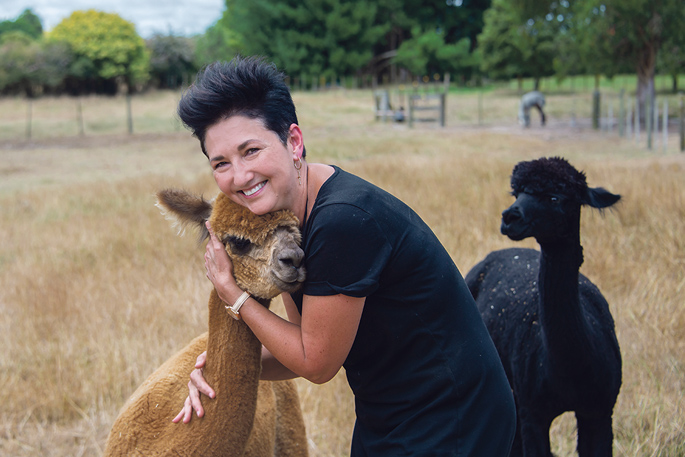