Farmers can now measure and, as a result, better manage weeds on their property with the help of a phone app developed by AgResearch.

The ‘Grassland Cover Estimator App’ provides an estimate of the percentage of a paddock that is occupied by a weed. This enables the productivity lost due to the weed to be calculated and used in a cost-benefit analysis for a proposed control operation.

“The app has already been downloaded by 45 users across NZ, China, UK, France, Germany, US and Canada.”

Graeme says the feedback from farmers has so far been very positive. “The catalyst for developing the app came from a Sustainable Farming Fund weed management project that I’m involved in led by Golden Bay dairy farmer, Corrigan Sowman.

“We’ve been comparing different management tactics for giant buttercup in on-farm field experiments with a view to developing a decision support system for management of this weed.

“It’s a simple-to-use but powerful, enabling measurement of the cover of any component of a natural grassland or sown pasture including any weed, desirable pasture plant, diseased plants, bare ground etc.

“The app keeps track of ‘present’ and ‘absent’ observations made by the user and uses this data in a method known as ‘Step-point Analysis’ to calculate the percentage of the paddock that is covered by the weed or other component of interest. The app also enables the data to be exported for more detailed analysis including, for example, mapping of the cover estimates for the paddocks on a farm.”

Precision and accuracy of the cover estimates generated by the app are the subject of an ongoing collaboration between AgResearch and Prof. Joe Neal, a weed science extension specialist at North Carolina State University. Results from this study, involving data collection in pastures and simulation modelling, will inform sampling protocols for using the app and will be published in an international weed science journal.

Graeme says there’s already been significant interest from other external stakeholders in NZ to further develop and expand capabilities of the app. The app is available, free to use, on Google Play and Apple App stores. 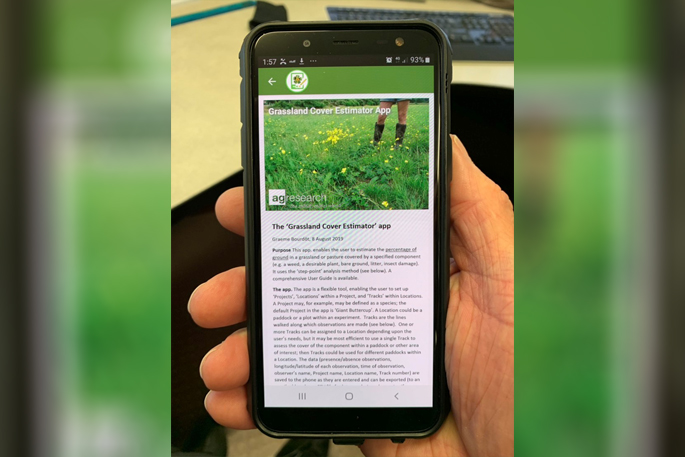