The new generation of Hannons on the land

Fifth generation Hannons, Marcel, with his wife Sandra, and sixth generation children, Jared and Sarah, are co-owners of the Te Miro block.

Introduction: This year the Hannon family of Hautapu, near Cambridge in the Waikato, travelled to the South Island town of Lawrence to collect a 2019 New Zealand Century Farm Award. The awards aim to honour and preserve families’ histories that are tied to the same piece of land for 100-plus years. In this second instalment, Coast & Country News writer Catherine Fry tells the more recent history of the Hannon family’s 154 years on the land.

Richard Garland Hannon and Carol married in 1963, and have four children; Richard known as ‘Rick’, Nadine, Mathew and Marcel. They started married life at the Te Miro block, living in the brick homestead and working for Richard’s father, the late Richard ‘Richie’ Capewell Hannon, for a couple of years. Carol remembers life up there very well.

“There was no electricity, so we went to bed when it got dark. The fridge was a cream can strung across the stream. [And so] We ate a lot of rabbits and pukeko!”

Thankfully, life today at the Tinopai homestead is a lot more comfortable. The couple have much of their own furniture there, but the house is still dominated by the past. The sense of history is enormous, with photographs, paintings and objects from previous generations all around them.

Richard looks at the shelves of papers and books and shrugs. “We’ve never even looked at most of these.”

The house is a protected historic home and is being spruced up, with the roof newly-painted, and the exterior is next.

Echoes of the past resonate through the large, high ceiling rooms, and Richard’s eyes twinkle as he mentions the possibilities of ghosts. “We haven’t seen one but others reckon they have.”

Marcel Hannon inherited the Te Miro block with his father Richard, in 2003. Marcel and his wife Sandra met while working at Fonterra, and continued working there until Marcel was made redundant.

The couple and their young family, Jared, now 13, and Sarah, now 11, moved into the old homestead at Te Miro and renovated it. Marcel stayed at home with the children and worked on-farm from 2008 to 2013, while Sandra continued working.

“We were pretty much the first family to live permanently on the farm since my parents in the 1960s,” says Marcel.

The couple role-swapped in 2013, with Sandra, who has a farming background, taking over the farm work, and Marcel returned to Fonterra. He spends much of his days off working with Sandra.

“We’re developing our part of the land, and have introduced 400 dairy grazers to generate cashflow.

Across the whole 360ha, there are 220 Angus cattle, 220 Romney sheep, and the 400 dairy grazers. Marcel and Sandra are committed to making the land a productive and viable drystock farm.

The new homestead requires wind turbines to generate power. It stands high above the family land, with outstanding panoramic views. With easy 20-minute access to Cambridge, it is a far cry from the old days, but a trek to the top of the farm, where the wind hammers from all angles, is a reminder of how remote and tough life would have once been up there.

The threat of the proposed Waikato Expressway route lingered over the Tinopai property, as it did much of Cambridge for many years. It was a stressful experience when 10 acres of the land was seized. “The expressway opened in 2015, but we’re still negotiating the price in 2019, and it’s been a costly, ongoing fight,” says Richard.

The road isn’t the only threat to the property. It is now in an industrial zone and slowly but surely neighbouring properties are being swallowed up by new industrial businesses. Regardless, Tinopai remains staunchly intact and running as a farm. 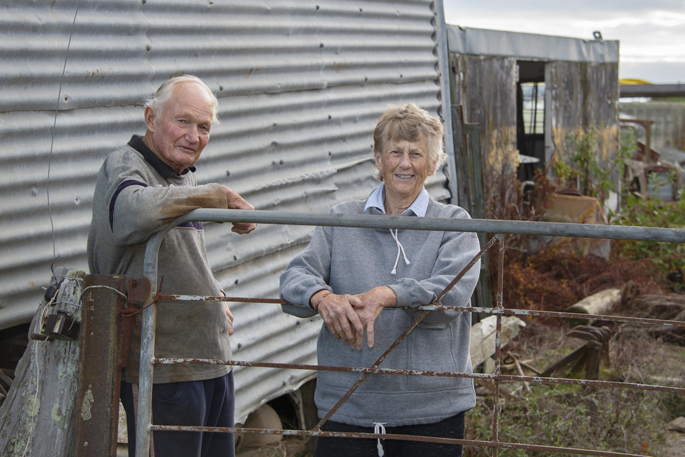 Richard, 77, and Carol, 77, still run the Tinopai farm full-time, and with amazing energy. The two farms still operate as one. Richard and Carol have around 150 Angus steers and yearlings from the hill block, and a 100 or so sheep to fatten.

The Hautapu dairy factory looms at the end of the road, heavy machinery and noisy manufacturing businesses line Hannon Rd, and the motorway hums in the background. But life at Tinopai endures behind its curtain of trees, and the stock quietly graze the green paddocks.

Despite the high value of the now industrial-zoned land, Richard has no intention of selling his family’s legacy, despite numerous offers. “In this case, it’s not about the money, this is our family’s land.”

Richard and Carol are happy to continue where each of the previous generations left off. Seven generations of family, children and grandchildren have worked on the farm, making it what it is today. As its Maori name implies – ‘Tinopai’ is a “very good” place to be.