Magnesium is an important but mostly forgotten nutrient in New Zealand agriculture.

It is inextricably linked to calcium, a mineral that is also neglected, or used for the wrong reasons.

They both should form the basis of fertility programmes. Other nutrients can be more effective when calcium and magnesium are at optimum levels.

They are vital for soils, plants and animals alike. Deficiencies of either result in serious economic consequences.

The percentages of calcium and magnesium on a soil’s base saturation are critical to the success of any growing operation. Don’t let anyone try to tell you it is a ratio – it is not.

An ideal soil is 45 per cent mineral, five per cent organic matter and 50 per cent pore spaces occupied equally by air and water.

Calcium and magnesium are the minerals that determine this configuration in the soil.

In turn, that determines the physical drainage characteristics and water/air holding properties of that soil.

Optimum pore space then translates to an ideal environment for soil biology to thrive.

Plant yields are not only determined by soil nutrients, but also by root depth.

Without the correct soil structure, high yields of quality will not happen.

The soil needs to be in top condition. It is mandatory that calcium and magnesium be correct.

On a Perry Agricultural Laboratory test, in most soils, calcium needs to be at 68 per cent and magnesium at 12 per cent. 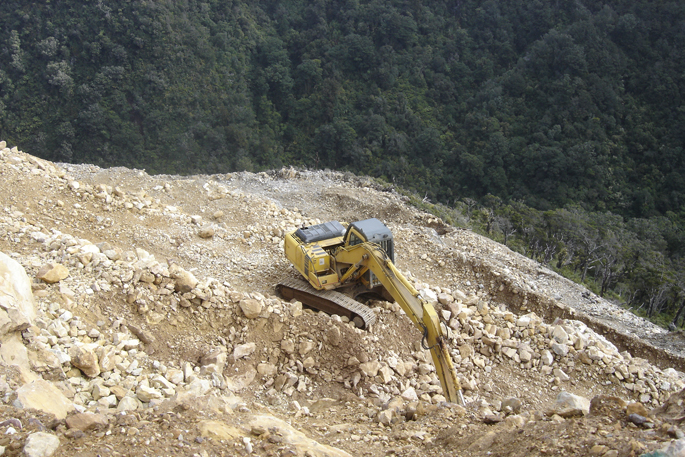 Extracting Dolomite from the Mt. Burnett quarry in Golden Bay.

In lighter soils, the amount of magnesium increases, while calcium decreases. Magnesium holds water better than calcium owing to the smaller size of the atom, giving a larger surface area.

Soils with inadequate magnesium will dry out faster. The total percentage of calcium and magnesium should not exceed 80.

It is the percentage that determines mineral adequacy, not the actual kilograms.

Crops respond in different ways when the ideal percentage is not achieved.

If magnesium, a determinant of nitrogen and phosphorus efficiency, is outside 10-12 per cent, maize yields will reflect that by tapering away from the optimum.

When soil calcium is below 60 per cent however, the soil will be too tight to allow magnesium to move out.

Deficiencies are far easier to deal with than excesses. It is a matter of adding the correct material that will raise the nutrients in the soil.

Some fertilisers will not raise soil magnesium levels. Dolomite will raise both calcium and magnesium in the soil. Coupled with calcium carbonate, correct amounts can be calculated to reach the selected soil percentages over one or several years, to suit economic circumstances.

For further information on calcium and magnesium, see our website: www.kiwifertiliser.co.nz