Karen Chapman enjoys another day in the milking shed.

Dairy farmers are keeping a dream alive for Karen Chapman, who grew up on a dairy farm in the small Waikato settlement of Otaua and has only ever wanted to milk cows.

Karen has been supported by a network of dairy farmers in and around Pukekohe, many of them participants in the IHC Calf & Rural Scheme fundraising scheme, who raise animals and donate the proceeds to IHC.

This year, the IHC Calf & Rural Scheme marks its 40th anniversary by celebrating all the farmers who have made lives better for people with intellectual disabilities in their communities. Over those 40 years, the scheme has raised $40 million.

Karen’s dream looked pretty hopeless because her Dad Noel Chapman, a sharemilker, died while she was still a teenager and she and her Mum Olive shifted into Pukekohe. Then, in a double tragedy, her mother died suddenly too, and Karen moved into IHC residential care.

Local farmers, once they knew of her love of dairy farming, welcomed Karen into their milking sheds.

Karen has milked all over the northern Waikato and South Auckland districts. A long-time family friend, Glen Lee, has driven her around the farms for as long as anyone can remember. Karen says she is “a good friend to me, I have known her for a long, long time”.

Glen would call farmers to see if Karen could visit. “It seemed to work best with the Goodwrights.”

Karen used to milk for Syd and Jenny Goodwright. These days their son Tom farms the home farm and Karen milks for their daughter Becky Payne and her husband Mike on their farm not far away. Another sister Hannah farms close by too with her husband Trevor Turner. All of them are donors to the IHC Calf & Rural Scheme and know Karen well. 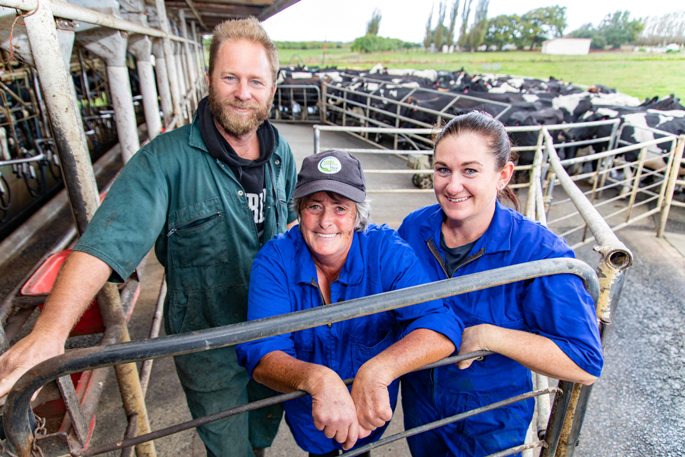 Karen takes a break with Becky and Mike Payne at the shed of the Pukekohe dairy farm.

Syd and Jenny have been donating calves – real and virtual – to the Calf Scheme for more than 30 years, and for half of that time Jenny has worked as a canvasser for the scheme, visiting around 50 local farmers each season to encourage them to pledge calves.

“I am really lucky because I have got a lot of farmers in the district like me who want to keep supporting the Calf Scheme. How lucky are we that we have had four children and 15 grandchildren who have no disabilities,” Jenny says.

Karen says she used to help her Dad milk about 100 Friesian-Jersey-cross cows after school. Now she is milking cows on farms with bigger herds and more complex and automated rotary cow sheds. “I have been doing it for a long time now,” she says.

IHC national fundraising manager Greg Millar says the IHC Calf & Rural Scheme gives IHC an important connection to the rural sector and has evolved along with changes to the sector over 40 years, particularly as smaller farms and local relationships have given way to larger dairy units.

Legendary All Black Sir Colin Meads, a Waikato beef farmer and staunch supporter of the Calf Scheme, encouraged beef and sheep farmers to get involved too.

“He first threw his weight behind IHC when he stopped playing rugby, and we were privileged to have had the backing of the big man from 1974 for more than 40 years until his death in 2017,” Greg says.

More than 10,000 Dairy Farmers have supported their communities over many years through this unique fundraiser. As technology advanced on to farms, farmers began profiling their favourite cows and best milkers on Twitter and can now donate virtual animals along with the real ones.

“We are incredibly grateful to the many farmers who have supported us over the years – some of them down through generations,” Greg Millar says.

“We’re also enormously thankful for the partnerships with our sponsors – PGG Wrightson who has been with us from the start and VW who provides us with Amarok vehicles and is matching donations from the public, dollar for dollar, this week. Go to the IHC Calf & Rural Scheme webpage to make your donation.”

The work done by IHC and funded by donations is critically important and can’t happen without them. This includes work with families of children with intellectual disabilities, community support provided by nearly 30 local IHC associations, our strong advocacy voice, a library providing resources to families around the country, a volunteer friendship programme, a national art competition for people with intellectual disability, and support for a national kapa haka programme.