They called them crazy – but University of Auckland-affiliated researchers have successfully demonstrated that cows can be toilet trained.

If cows could be trained to urinate in a “toilet” at least some of the time, nitrogen could be captured and dealt with before it pollutes water or turns into nitrous oxide gas.

“We’ve shown proof of concept that we can train cows and train them easily,” says Douglas, a University of Auckland professor of psychology. “Cattle urine is a major cause of our nitrogen problem. Any reduction in that would make a difference.”

“People’s reaction is ‘crazy scientists’ but actually, the building blocks are there,” says Lindsay, a University of Auckland honorary academic and director of an independent research company.

“Cows have bigger urinations when they wake up in the morning, which demonstrates they have the ability to withhold urination. There’s nothing in their neurophysiology that radically differentiates them from animals, such as horses, monkeys and cats, which show latrine behaviour.”

Lindsay has been around cows for a long time – he grew up on a dairy farm and did his PhD research on learning and preference in cows.

In 2007, during a radio interview about the environmental impact of cattle excretion, the host suggested Lindsay should toilet train them. It was a joke – but it got Lindsay thinking.

In 2015, Lindsay was working with Professor Lars Schrader at the Federal Research Institute for Animal Health in Germany when Schrader suggested toilet training to deal with ammonia emissions, which result from contact between faeces and urine.

Previous international attempts to toilet train cows had seen little success, but Lindsay thought that with his deep expertise, he might be able to do better. He brought in Douglas, who has complementary skills in behavioural analysis, to help.

With their German colleagues, Lindsay and Douglas worked with 16 calves at a farm operated by the Research Institute for Farm Animal Biology in Germany.

First, they demonstrated that most calves could be trained to “hold it.” If they began to urinate in the wrong place, the scientists would make their collars vibrate.

While the vibration didn’t hurt them, most of the calves soon learned to walk a short distance to a latrine pen.

Next, Lindsay and Douglas put the calves in the latrine pen, which was bright green to differentiate it from other pens, and rewarded them with a favoured food treat if they urinated there.

“This is how some people train their children – they put them on the toilet, wait for them to pee, then reward them if they do it,” says Lindsay. “Turns out it works with calves too. In very short order, five or ten urinations for some animals, they demonstrated they understood the connection between the desired behaviour and the reward by going to the feeder as soon as they started urinating.”

The next progression was to increase the distance cows had to walk to the latrine.

If “accidents” occurred in another part of the barn, scientists would squirt a little cold water at them. 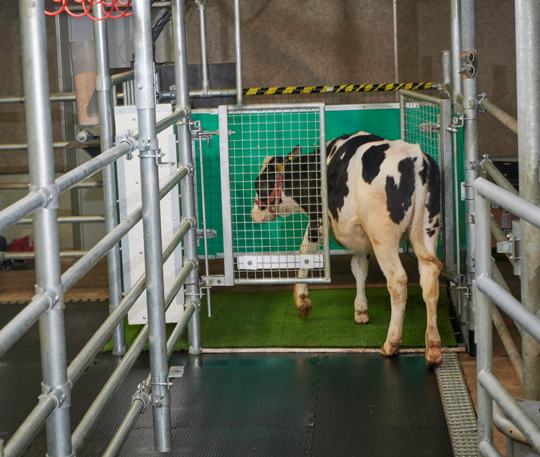 The calves received only 15 days of training and the majority learned the full set of skills within 20 to 25 urinations, which compares favourably to toilet-training time for three and four-year-old children.

The next step for Lindsay and Douglas is to bring their research to the New Zealand context, where being outdoors may make toilet training more of a challenge.

Possible solutions are cows using the latrine while gathered at milking or on the feed pad.

Installing latrines outdoors may be another possibility.

The researchers say even if these changes result in a lower success rate, reducing urine patches would have significant environmental benefits.

“If we could collect 10 or 20 per cent of urinations, it would be sufficient to reduce greenhouse gas emissions and nitrate leaching significantly,” says Douglas.

Another challenge will be to scale up so it’s economically feasible to train millions of animals. This could be accomplished by using urination-detecting sensors and automatic reward systems. Trained cows could be transitioned into not expecting a food reward after every urination, the researchers say.

With help from UniServices, Lindsay and Douglas have met with representatives of the New Zealand dairy industry, who are interested in the research as a potential way of avoiding the herd reductions that may otherwise be necessary to meet emissions targets.

A further application of the research may be to extract and reuse nutrients, such as nitrogen and phosphorus, from the collected cow urine. At the University of Auckland and elsewhere, there are researchers in fields such as chemistry and engineering working on closely related problems.

“This is new science, what we’ve done here, so there are many ways to push it,” says Lindsay. 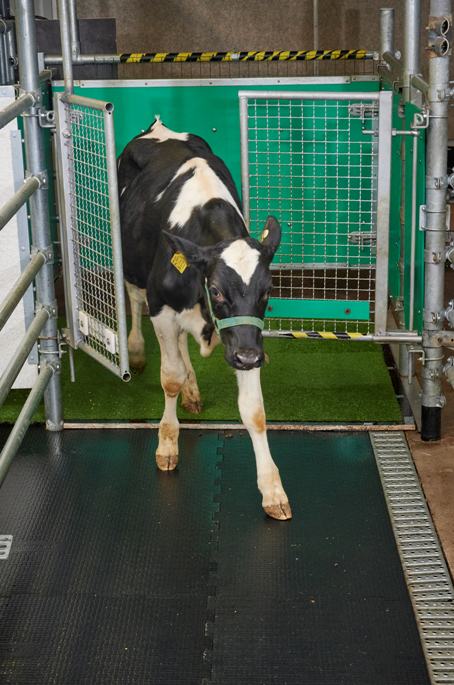