More than a century since its establishment, the Waingaro Church is still lovingly looked after by the local community, many of whom are descendants of the original settlers who built it more than 110 years ago.

Bridgette Boyce-Bacon is the fourth generation of the Rathbone family to be part of the Vestry team. She has taken over the main caretaking role from her father Guy Rathbone, keeping the tiny Anglican church looking picturesque as it sits amidst mature trees and native bush.

In the late 1800s to early 1900s the Waingaro and Te Akau were isolated rural backwaters, with strong farming communities.

Access was initially from Raglan, across the harbour to Waingaro Landing, and latterly the early roads to Ngaruawahia were suitable for horses and riders only.

The close knit families held religious services in the homesteads of the area, including Dunmore Corner, the Rathbone homestead.

The church was built in 1907, on land donated by the Seavill family, using £200 raised over five years by the community, plus £100 borrowed from the General Trust Board of the Anglican Church.

“The architect was Reverend Henry Wingfield, who had studied architecture before he was ordained in 1897,” says Bridgette.

“He asked for the name St Albans, after the first British martyr.”

It is a fine example of the simple Gothic Revival Churches erected throughout Victorian and Edwardian New Zealand.

The families of the district donated the altar, font, lectern, and the altar linen and hardware.

The beautiful native timber interior is still intact, although one area was replaced when an arson attack in 1966 was spotted early and extinguished before too much damage occurred.

The burial ground was consecrated in 1919 by Bishop Averill. Today it is a peaceful place, a final resting place of the early settlers and their descendants.

“All the plots are sold and there is no more room in the graveyard.

“My family all have plots reserved for them.”

Electricity was connected to the Church in 1954 by Walter Seavill and H W Upton.

Funding nowadays is still very much through district fundraising and family legacies, plus some Parish obligations.

Bridgette and her husband Phil recently painted the outside of the church using a grant from the WEL Energy Historic Place Fund.

Today the church is used for festival services, funerals, weddings and christenings. Bridgette says the current community is still very committed to the upkeep of the building and grounds, with both their time and money. 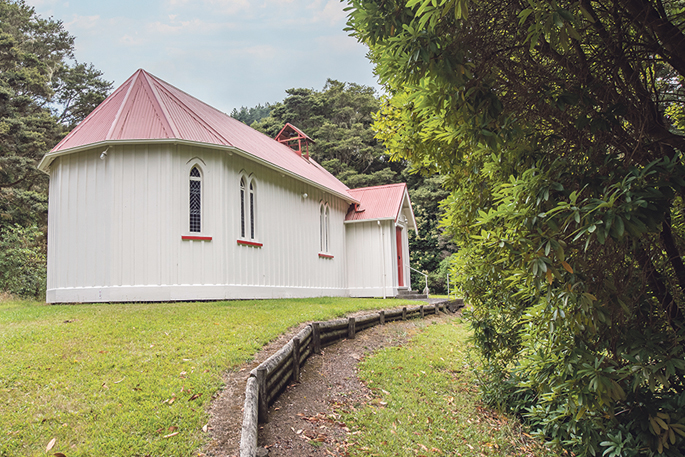