The stares continued when those 22 tractors parked in formation at their new home at Seeka headquarters, in front of the iconic kiwifruit monument.

“We’ve sold multiple tractor units before but only about six at once,” says Steve.

“This certainly takes the cake.” This is part of an order for over 30 tractors destined for Seeka, some orchard contractors, and some individual orchards.

The primary job for the 22 tractors will be towing trailers during the kiwifruit picking season, on Seeka’s 1500 leased and managed orchards in the Bay of Plenty plus some more of the same model for other areas throughout the country, notably Coromandel and Kerikeri.

“It’s about reducing unnecessary risk. These tractors have decent brakes, are four wheel drive and have power steering. They’re built for under the vines.”

The new tractors join Seeka’s fleet and replace orchard classics, like Massey Fergusons and David Browns that are 20-30 years old.

The low seats on the Carraros sets them apart from other horticulture tractors says Jacks Machinery salesman Steve Donoghue.

Most of the tractors’ features are manually operated – from the hydraulics to the lift arms and PTOs.

“Having predominantly manual features means there’s less chance of the tractors breaking down on the orchard.

“In this case, the less automatic technology there is, the better.”

“Many orchard owners want a second tractor, or don't need a 100hp tractor but do need a four wheel drive.

“Maybe they don’t have $70,000 to spend on one piece of machinery. These tractors fit within reasonable budget, while being perfect for the lighter orchard jobs.”

Despite already having nine Carraros that are 80-90hp, Roy says hours of research went into picking the brand for their big purchase.

Steve Donoghue says sticking to the same brand will make it easy for workers.

“They won’t need to re-familiarise themselves with the gear when they work between different orchards, they can just jump on and drive it.

“The bigger Carraros have a very similar layout, too, so they'll know straight away how it drives.”

The easy-driving of the model was proven when the truckies delivered the tractors.

“The drivers said: ‘it’s not a Suzuki Swift, I don’t know how to drive it’ – but we gave them a quick lesson and it was absolutely no problem. They picked it up just like that.”

Down to the wire

To be in time for harvest, Roy knew the tractors had to arrive by February 15.

“There was time pressure, as we knew Covid-19 may cause delays,” says Roy.

“We put the order in on September 2 last year, and 22 out of the 24 tractors arrived exactly on the day.”

Steve Jacks says selling to Seeka helps them give feedback to their suppliers.

“Seeka’s machinery does a lot of hours – they do as much in a year as some orchards do in 10+ years.

“That helps in terms of product development, as we can go to our suppliers and point out where the issues are under those conditions.”

The tractors are soon to be on their way to Seeka orchards throughout the country, the furthest location being Kerikeri. 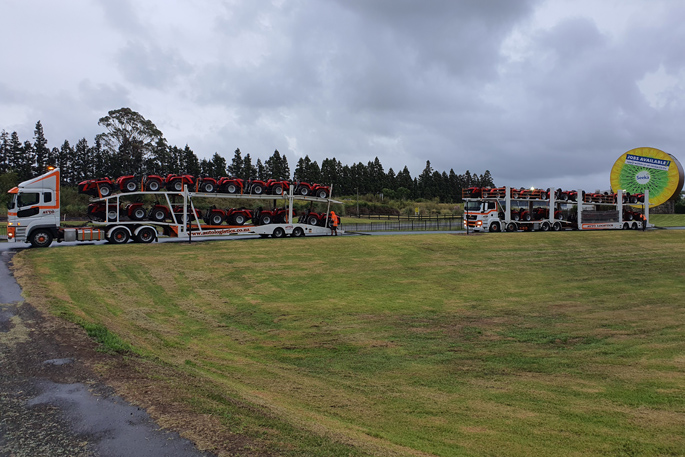