Standing in his self-built mushroom-growing room on his parents’ Whakamarama property, Billy Roy is worlds away from his former career in the film industry where he worked as a prop creator.

“The film industry is incredibly wasteful – the main products we used were polystyrene, expanding foam...basically anything petrochemical.”

And it took a major toll on Billy’s health. “Working in film is just go, go, go. I became chronically fatigued,” says Billy, who is today known as Billy ‘Mushroom’ Roy.

Five years ago, while working on a film in Australia, Billy developed heavy metal poisoning due to ongoing exposure to petrochemical materials. “It really hammered me. But, you can look at these things as curses, or blessings.

“For me, getting sick has been a great awareness raiser. I learned that coming back here, and doing something that feeds people and contributes to a harmonious existence, is the best thing for me.”

Today he runs Marama’s Mushrooms on a small part of his parent’s 4.5 acre Whakamarama property, which is also home to two houses, about one acre of woodlands and a work-in-progress food forest planted five years ago. Much of his set-up, including a mushroom growing room, Billy built himself.

The food forest sparked Billy’s interest in fungi. “Through my study of mushrooms, I’ve realised that fungi play a massive part in our food’s nutrient density: plants give the fungi sugars, and in exchange the fungi will mine minerals to take back to the plant.

“We’ve only scraped the surface on what mushrooms can do for our health, and the soil’s health.”

Billy says going from a bag of substrate to edible oyster mushrooms takes about 19 days. Raw materials, including grain, are placed into a plastic bag and steamed to rid of competing bacteria.

Following an inoculation process, the 5kg bags are sealed and taken to an incubation room, which is kept warm enough to encourage spawn growth using a heat pump.

Once the bags are fully colonised, they are ready to sell. All customers have to do is cut a square into the bag, keep it in a sheltered area, and watch their mushrooms grow.

“You get a good first flush of mushrooms, and any further flushes are a bonus,” says Billy.

“But, if you have some straw or woodchips in your garden and put the block in there, the mycelium (the thread-like vegetative part of the fungus) can spread, extending your yield of mushrooms.”

Before starting Marama’s Mushrooms, Billy sold formed oyster mushrooms at the Tauranga farmer’s market and a few outlets – but really, the mushroom-growing was just a hobby.

At the brink of lockdown, he turned his hobby into a business selling grow-your-own oyster mushroom blocks. And Marama’s Mushrooms rode the trend of people wanting to grow their own food during lockdown, selling 300 mushroom blocks in the first month.

“Selling blocks wasn’t the original plan, but it was a more viable option during lockdown. It was also much safer – the process means the bag’s contents is sanitary, and untouched.”

When Billy’s parents built their Whakamarama home 25 years ago, they used recycled materials wherever they could – from all of the joinery to the kitchen benches. Their sustainable mindset seems to have passed on to Billy, and is very much the philosophy of the property.

“Seven people live on the property, and we all follow the core ethics of permaculture: people care, earth care and fair share.”

Everything grown on the property is organic. “We fertilise with seaweed, carbon and biochar, and have chickens and ducks running around to help fertilise.

“Having sticky fly traps and an electric insect killer where I grow mushrooms for the markets usually does the trick, but my next thing to try is frogs.”

Billy strives to make Marama’s Mushrooms as close to zero-waste as possible. “I’m trialling clay pots with lids as an alternative to plastic bags for growing the mushrooms in. So far the pots have worked well. They are more labour-intensive, but as long as mushrooms can grow in them I’ll happily make the switch, and set up a container swap system.

“I’d rather put in more work now than create more mess for future generations to clean up.” 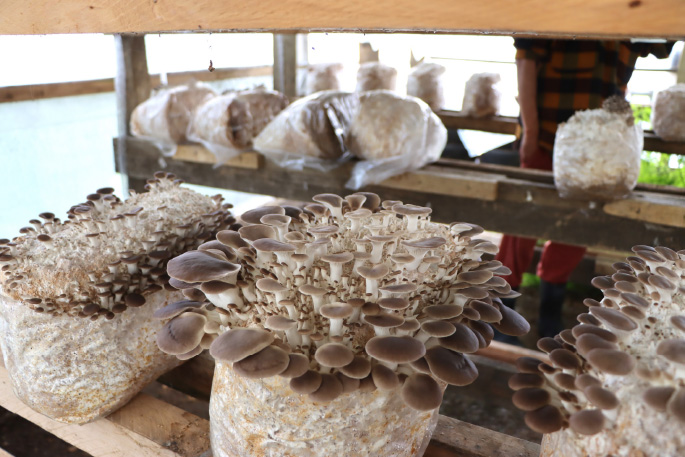