With spring beckoning the start of maize cultivation season, the Foundation for Arable Research has released updates on pests of seedling maize. Here, we focus on information to prevent the occurrence of argentine stem weevil and greasy cutworm.

Argentine stem weevil (Listronotus bonariensis) was first recognised as a pest in New Zealand in 1933 and is now regarded as one of the country’s major insect pests.

Both adult and larval stages feed on a range of cereal host plants and grasses and maize.

Maize can become infested with ASW larvae if planted without a suitable fallow period, about six weeks, after cultivation following pasture, annual ryegrass or cereal crops, or in previously-cropped ground where grass weeds are present.

In these conditions, partly-developed larvae transfer from decaying grass tillers and tunnel into young maize plants.

ASW can kill maize plants before they emerge, while seedling damage can resemble moisture stress – for example, centre leaves wilt and turn blue-grey and can be pulled out of the plant very easily by hand.

The growing point is usually eaten, resulting in collapse and death of the plant at the two- to four-leaf stage. Movement of ASW larvae between maize seedlings is rare and larval development is usually completed in a single seedling. Almost all ASW damage occurs in the first four weeks of plant growth.

Use of Integrated Pest Management methods should be considered when trying to reduce the risk of ASW damage. IPM offers an opportunity to move away from a routine broad-spectrum insecticide-based approach to pest management by considering cultural and biological strategies.

For full details of IPM methods and considerations are at: https://www.far.org.nz/articles/278/far-focus-12-integrated-pest-management

The best method of controlling ASW larvae is implementation of a fallow period of six weeks prior to planting. The fallow starts when all grass is completely buried. Cultivate to achieve a fine, even seedbed ensuring all clods are broken up to hasten vegetation breakdown. During the six-weeks, the ASW larvae move to the soil surface where they die from starvation and desiccation.

In no-till or strip-till systems, a chemical fallow can be used to terminate the winter crop six weeks before maize sowing.

If crops are planted into areas at risk of ASW damage without a fallow period an insecticide should be used. Treated seed is the best option for ASW control in maize. More information is at: https://www.far.org.nz

Greasy cutworm (Agrotis ipsilon) has a very wide host range including maize and occurs in all maize-growing regions in New Zealand.

Young larvae are foliar feeders while older larvae, from about the third instar stage onwards, feed on seedlings at, or below, ground level. 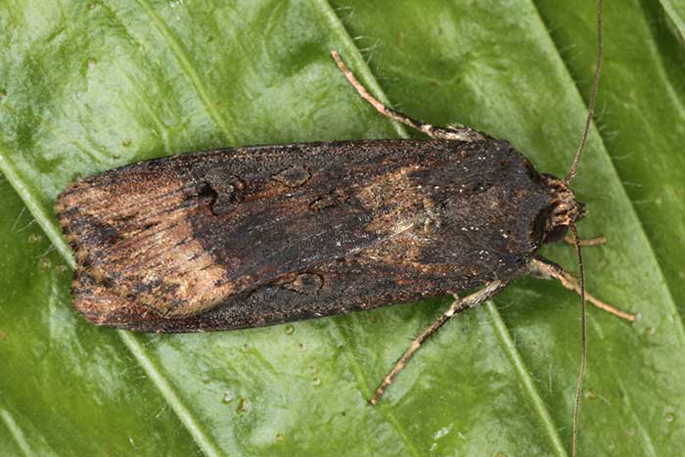 Damage can start before maize emergence, but typically plants are cut and felled at ground level after emergence. Often a severed seedling is dragged into the cutworm’s ‘burrow’. In larger maize plants, cutworm can be found tunnelling inside the stem. Larval feeding often destroys the growing point, at the base of the plant, killing the seedling. Plants cut above the growing point usually survive but have greatly-reduced yields. Cutworm infestations of three per cent of plants before the two-leaf  stage, or six per cent at the two-four leaf stage, can equate to losses of more than 10,000 plants/ha.

Again, use of Integrated Pest Management methods should be considered when trying to reduce risk of greasy cutworm damage.

The success of any greasy cutworm control programme depends upon recognising field conditions that favour their development and undertaking frequent scouting, from seedling emergence, to enable early  detection.

If required, a properly-timed application of an appropriate insecticide will achieve good control.

Treating seed with the neonicotinoids gives short-term control, particularly where cutworm numbers aren’t high, and has the added benefit of helping to control black beetle and Argentine stem weevil.

Concern around off-target impacts of neonicotinoid insecticides (acetamiprid, clothianidin, imidacloprid, thiacloprid, thiamethoxam) has led to public concern about their use in crops and seed treatments.

It is important, as an industry, to show that these, and all chemicals, are only ever handled and applied using best practice. Support your industry by adhering to best practice.

A  range  of  insecticides  have  registration  for  cutworm  control  in  maize  and  sweetcorn. Synthetic  pyrethroids are the most effective because of their outstanding soil activity. A synthetic pyrethroid insecticide can be used in combination with pre-emergence herbicides in fields where cutworm is a perennial problem. It is important to note overuse of broad-spectrum insecticides can result in encourage the development of insecticide resistance and the loss of beneficial insects.

Stocking the best - Jacks Machinery is 50

Setting up a flower farm

Growing to the demand

Stocking the best - Jacks Machinery is 50

Setting up a flower farm

Growing to the demand