Installing a fish ladder inside a culvert to provide access upstream for whitebait.

A project involving landowners, including pastoral farmers and orchardists, which could result in both an abundance of whitebait for locals and recovery of fish numbers is planned for waterways in the Northern Tauranga Harbour region.

Uretara Estuary Managers chair and Project Parore member Lawrie Donald says the proposal is to remove migration barriers to indigenous fish species in all the streams in the area.

“The biggest threat to our indigenous fish species is not from the whitebait fishers, but from manmade barriers which prevent them migrating up stream.

“The objective of this new proposal is to extend the project to include all the streams that enter the Tauranga Harbour north of the Matahui Peninsula.”

The proposal is for a joint project between the community, Western Bay of Plenty District Council, Bay of Plenty Regional Council, Department of Conservation, Uretara Estuary Managers and Project Parore.

“Last year the Uretara Estuary Managers, as part of its ‘Hills to Ocean’ project, requested the regional council carry out a study of fish migration in the four streams which discharge into the estuary near Katikati.”

Lawrie says following that study a contractor carried out remediation work on 43 impediments in the four streams, with almost immediate results.

“In one case, mussel ropes were installed at a ford, which appeared to be a complete barrier to migratory fish. The work was finished by 3pm.

“After dark at about 8pm we inspected the ropes to find fish already climbing up and heading upstream. It was a great, instantaneous success.”

Often called ‘fish ladders’, the systems installed to enable fish to navigate manmade barriers are designed around the particular obstacle and may include ropes from mussel farms, ramps or baffles. 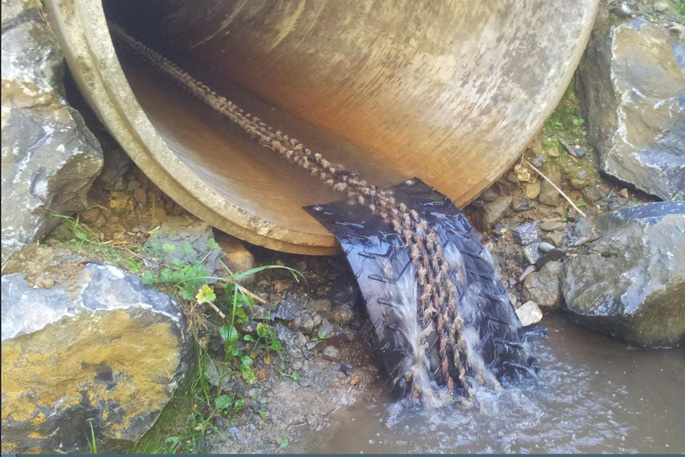 The idea is to enable the tiny fish to ‘climb’ or swim around a barrier and then rest in quiet water before making the next dash upstream.

Whitebait are the juveniles of six species of fish. Five of these are migratory galaxiids: inanga, banded kōkopu, giant kōkopu, kōaro and shortjaw kōkopu. The sixth species is common smelt.

Inanga begin life as eggs laid in vegetation beside streams in late-summer and autumn. When the eggs hatch, they are carried downstream as larvae and spend the next six months at sea. In the spring they migrate upstream as whitebait and grow into adult fish.

That’s why, says Lawrie, removing barriers to their upstream migration – and ensuring there is habitat for them when they get there – is vital to restoring viable population numbers.

When male kakahi release sperm into the water in summer, females inhale this, and the fertilised larvae (glochidia) are ejected. Using long sensory filaments, the larvae latch on to gills and fins of fish, usually the koaro, which take them upstream where they drop off to bury into the sediment. At that stage they are less than 0.5mm but during a 50-year time span, can reach 10cm long.

Lawrie says the objective of the project is to ensure any migrating fish (whitebait) that enters through the Bowentown entrance can reach any stream and find a home.

“There is a need to educate landowners, the community about what a barrier to native fish looks like. Training will also be made available to contractors who may be installing stream crossings for subdivision purposes. Advice and demonstrations to this group will hopefully avoid future barriers being constructed within streams in the local area.”

Find out more at: https://www.uem.org.nz/projectparore