A new lease of life for Thackray’s Hall

Ruairi and Vicky Kelly enjoy a break from their busy lifestyle.

Ruairi and Vicky Kelly and their two young children have been living in the 112-year-old Thackray’s Hall in Manawaru for the last four years.

Both the building and management of the one-acre section is a project suits the family’s goal of a zero-waste lifestyle well.

The hall dates back to 1908 and was built primarily for social events because back then there were no churches in the area – and nowhere for the community to gather.

Since then it’s been used as a drill hall for the Territorial Army, a bakery, a Post Office and was a shop run by Farmers Trading Company.

The Kellys are the third owners to live in it primarily as a residence, although Ruairi suspects people lived in the back part when it was a shop. The front part is their home. The back part, called ‘The Backhouse’, which is Vicky’s mother’s maiden name, is set up as holiday accommodation.

Ruairi and Vicky, both from the UK, bought their first house in Te Aroha and the week after they’d finished remodelling it, they sold it.

“We wanted more space,” says Vicky. “The area was not going to be big enough for us when the children got bigger and we’d dug up the entire front lawn so we could have a vegetable garden big enough.”

They bought Thackray’s Hall the day it was advertised for sale. “Friends who lived across the road from it told us about it. Back then, it hadn’t been lived in for more than a year and there were nests and dead birds everywhere.”

But there were many redeeming qualities. The orchard, which Ruairi estimates to be 40 years old, has amazing views of Mount Te Aroha; and the hall-turned-house and one-acre grounds offer space.

“We wanted somewhere that could be our home, where we could grow food for our family and share the space for community activities as well,” says Ruairi.

Fortunately, the 112-year-old building is structurally sound but plenty has been done to make the building fulfil the Kelly’s goals; and the couple wanted to do most of the work themselves.

“We’ve used an electrician for all electrical work and had a builder for things we couldn’t manage ourselves; for other big jobs, we’ve had friends come and help.”

The first two years, they lived in and worked on ‘The Backhouse’. “We needed to get the kids into warm rooms before we could do anything else. The ‘The Backhouse’ had been used as accommodation before so was a much easier starting point,” says Ruairi.

“We did minor renovations in the kitchen and replaced fixtures in the bathroom,” says Vicky.

But the family wanted to live in the front of Thackray’s Hall “where all the old character, charisma and history of the building was more apparent”.

With no load-bearing interior walls there was a massive space to work with. “We had to insulate it before doing anything else as it was very cold. The roof was particularly challenging as the tin roof was put directly onto original native hardwood sarking.

“We had to put in another ceiling to get space. It’s a shame not to have the native wood exposed, but it’s still up there.”

In the old kitchen the Kellys were pleasantly surprised to find plastic coating on the cupboard doors came off easily and there was solid wood beneath.

“Our goal is to re-use and re-purpose products. I particularly wanted a wooden kitchen, so sourcing products from re-purpose centres suited us really well,” says Vicky.

“We put in a new oven, moved the kitchen cupboards into the centre so we have a big workspace for cooking and preserving produce. We put in a fireplace and done loads of painting.

“We’ve painted the whole interior white, which we love. It reflects the light and makes the place feel really spacious and open.”

They also re-wired the whole house. “Our bedroom is on the mezzanine floor above the living area and the children’s bedrooms were already partitioned off from the main hall area.”

The Kellys have achieved many of their goals, but there’s still plenty they want to do. They’re converting a ‘mud room’ into a second bedroom in the ‘The Backhouse’; and an apple orchard is planned for making cider. 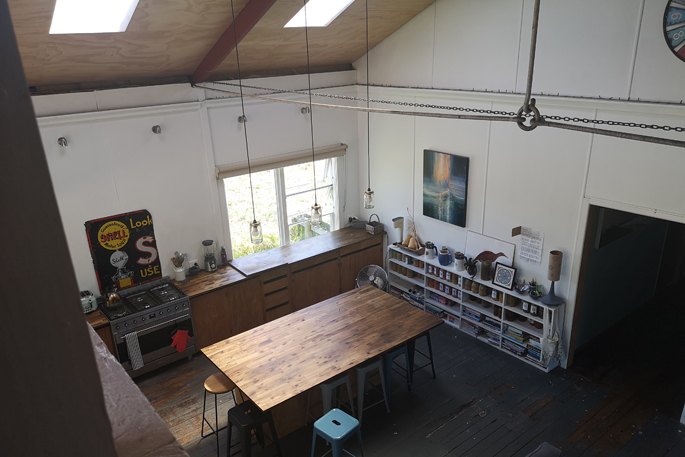 The hall is a massive space to work with.