The Waterwheel Trust founder Stan Fretwell and his wife Phyllis.

It’s a tongue-in-cheek remark that makes light of the fact members have painstakingly restored hundreds of pieces of vintage machinery, vehicles and equipment – many to working order – across an estimated 100,000 hours of labour.

The trust was formed in 1989 by Stan Fretwell and a small group of locals who saw a need to preserve the history of the Eastern Bay of Plenty – what Stan called the “industrial archaeology of New Zealand”.

Since the 1960s, hundreds of vintage pieces have been donated by local people, having lain in disrepair on farms, in sheds and homes.

“Every piece of equipment we have saved has its own story,” says Stan.

“The donors often tell us the price they paid and the effort to save enough money to purchase it, and how  much better life was after it came into use for them.

“The fact is, it made us the wealthy nation we are today.”

First registered as a community company in 1990, the organisation became a charitable trust in 2006 and was renamed the Waterwheel Historic Trust.

Bursting at the seams

The trust has been run from the former Kawerau Intermediate School for the last two years, with the workshop, storage and the museum housed in several different buildings on-site.

Trust member John Couch says around seven years ago, a fire ravaged much of the collection and is one of the reasons they’re currently cramped in the old school rooms.

“Sadly, the machinery was mostly in good condition with some completely restored. There were a lot of engines, and a huge number of old chainsaws. There were also agricultural implements and hand tools.”

Despite the limited space, the museum is a comprehensive collection of treasures from yesteryear.

Buggies, carriages, tractors and other vehicles are displayed, as is farming equipment such as sprayers, tools, chainsaws and saddlery.

Open Wednesday and Friday mornings and by appointment, the museum hosts schools, retirement village and social groups with people often “staggered by just how much we have in our collection,” says John.

Trust co-chair Stephanie Johnson Bull says they’d love to find a larger premises nearby. “A bigger building would allow us to accommodate the entire collection by creating a formal museum, with the equipment set up permanently so the public can have a hands-on experience.”

Stan knows more than most the sheer toil that NZ’s early farmers endured.

Historically, the Eastern Bay of Plenty was swamp land, and an enormous amount of hard work was required to turn it into the high-producing land it is today. “What is often forgotten is that much of the land went through as many as six owners before it was finally profitable enough to sustain the last person to take it on,” says Stan.

“Those who failed often walked off totally broke, with only what they could carry; my own family lost three properties through my Dad’s lifetime.”

As much of the first farming endeavours were small areas of wheat, barley, and oats, Governor General Sir George Gray commissioned the region’s first power unit to be built in 1860 – the Te Umuhika Waterwheel.

The waterwheel – after which the trust is named – was set up at Braemar Rd and used to drive a flour mill, which enabled local grain processing and in later years, a flax mill. The mill burnt down and the remnants of the waterwheel lay in disrepair for many years. However, the wheel hub and rim section was salvaged by the Whakatane and Districts Historical Society in 1959 and subsequently passed to Stan.

He used the relics to estimate the dimensions and construction of the original wheel, which was replicated and put on display in the museum.

The museum also holds the remnants of the tools used to drive the service industry, which was created when the land became more settled and cattle began to arrive.

“It is these agricultural items that The Waterwheel is trying to save as a memento of how basic and useful this was to our growth in this district, and to the skill and determination of local farmers to get on and get the job done,” says Stan. 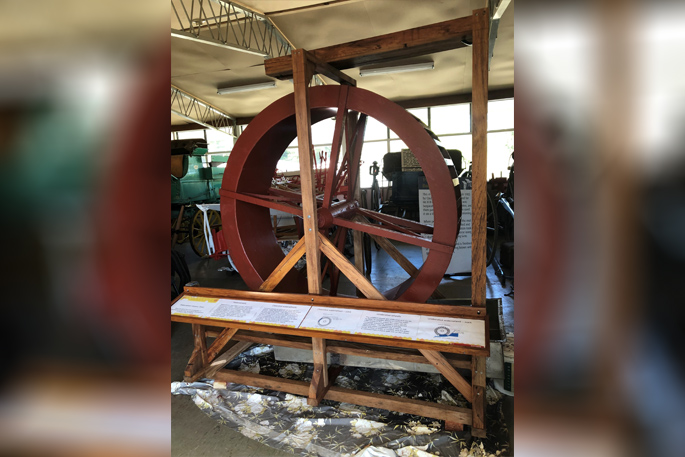