A new stock truck effluent disposal site has been opened at the foot of the Kaimai Range to reduce risk of waste spillages onto roads from trucks carrying livestock to and from the Bay of Plenty and across the Waikato region and prevent it from entering waterways.

Opened by local mana whenua representatives on February 11, the site represents a significant step towards making Waikato roads and the environment cleaner and safe.

The new facility is at the intersection of State Highway 29 and State Highway 24, and 3km east of Te Poi, and is adjacent to an existing police-operated enforcement and weigh-in facility to ensure traffic flows safely with minimal disruption for residents and the general public.

It’s estimated 7300 stock trucks use this area of roads every year and it is predicted 2,555,000 litres of stock effluent could be collected from this new site each year.

Waikato regional councillor and chair of the regional transport committee Hugh Vercoe says while this may seem an unassuming site, the essential need it meets for the Matamata-Piako and wider Waikato communities shouldn’t be understated.

“Careful planning and stakeholder engagement over a number of years have ensured we were able to provide the smart solution and value for money residents and ratepayers called for.

“The facility represents a considered and collaborative response to concerns from local communities, improving safety without tarnishing the landscape at the foot of the majestic Kaimai Range,” says Hugh.

The site has been developed by Waikato Regional Council and the New Zealand Transport Agency, in consultation with Matamata-Piako District Council and with support from other key stakeholders.

NZTA portfolio delivery manager Darryl Coalter says besides being unpleasant and bad for the environment, spilled stock effluent can present a skidding danger and create a safety hazard on roads by being splattered on to windscreens.

“We’re pleased to be working with our partners to make journeys through the Waikato and over to the Bay of Plenty safer and more pleasant.”

The facility includes a 50,000 litre tank below the ground, odour extractor and monitoring system and is designed to be easy-to-use for stock truck drivers.

Matamata-Piako Mayor Ash Tanner says the new effluent disposal site is a step in the right direction towards keeping the district the right kind of green.

“An easily accessible site for truck drivers to purge effluent from their trucks is a huge benefit towards keeping it off our roads. Safety on our road is paramount, we don’t want anything on our roads that could potentially cause a crash.”

The Mayor says Matamata-Piako is a popular route for many tourists travelling between Waikato to BOP and diverting the effluent from the roads will go a long way to working towards keeping the district clean and green. And it is hoped the new facility will help ensure the sort of spillages that tarnish the roads and reputations of the important road freight and farming sectors could soon become a thing of the past.

The cost of constructing and operating the new facility will be funded by WRC and NZTA. A targeted rate for stock truck effluent disposal facilities has been collected by the council for this purpose since 2012. 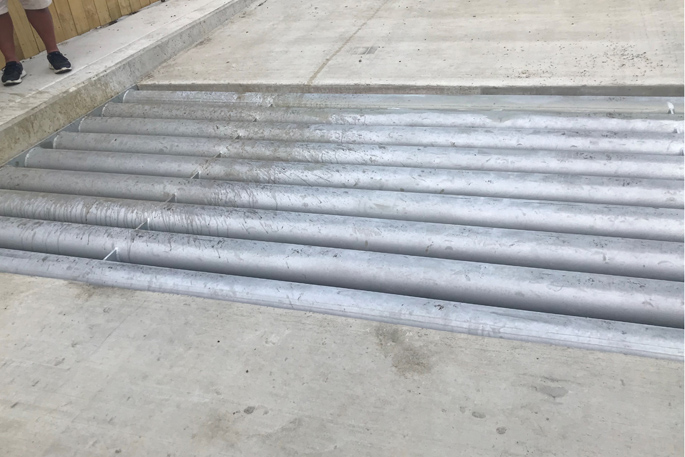 The grate that is part of the new facility.