During some tough years in the Hauraki Plains, dairy farming had slowed and money wasn’t being spent in the community. And the centralisation of rural professionals to larger towns also contributed to a loss of activity in the district.

A number of people, mainly dairy farmers, identified an opportunity to bring benefit to the plains, and the Profitable Progressive Plains or P3 Trust, as it is known, was set up in 2012.

Plains dairy farmer Conall Buchanan was involved from day one and is still on the Board of Trustees.

“The P3 Trust is a community organisation put together to enhance the wellbeing of the people and community in general of the Hauraki Plains,” says Conall.

“We send out 700 newsletters, but only have 350 farms in the area, so the local community and also beyond that are benefitting.”

The P3 Trust has developed several strategies for enhancing what it can offer the community. Several field days have been run, and are open to anyone who wishes to attend.

“We try to keep the topic relevant to the district at the time. For example, a recent one was about Farm Environment Plans.,” says Conall.

Twice-a-year the trust facilitates education opportunities, such as a course to assist managers and contract milkers to their first $100,000 of capital. “Having a group in an area showing a group need, helps national organisations focus on that area.”

The trust’s speaker series have been well supported and are “designed to make you think”. For example, a recent speaker was Paralympian Liam Malone.

The most well-known work of the P3 Trust is its Monitor Farms. And farms that are recognised as operating at a good level of performance are invited to participate. Heading into the fourth year, five farms are involved.

“Initially, focus farms were involved in profitability benchmarking, identifying the most important factor for profitability to be – the ability to harvest 13 tonnes or more of dry matter from grass on-farm.”

Conall says the monitor farms are spread geographically throughout the region, and are a mix of production systems, operating systems, management systems, and soil types. These farms monitor and record certain information on a weekly basis.

“The information reported is significant to all farmers wishing to optimise profit and move from a satisfactory operation to an optimal operation.”

Reporting is honest, and includes any mistakes made and the repercussions. The publication and sharing of the reports, plus field days on the farms assists local farmers to refine their operations and systems.

“At the end of each season we have a full season wrap-up with each farm, sharing their farm working expenses for the year broken down into each area of expenditure such as animal health, wages, feed etc. It also includes other business KPIs such as monthly growth rates, total feed harvested on-farm, and milk production,” says Jaimee.

Farm owners Bob and Jill Nichol, and their 50/50 sharemilkers, Hayden Brown and Sarah Manunui, are one of the newest monitor farms. The 200ha System 2 farm consists of 120 paddocks, with a completely flat contour, just outside Komata, and almost circled by the Waihou River.

The milking herd consists of 600 crossbred cows, and carries 120 replacements through until June. The farm has three full-time staff, including Hayden.

Hayden and Sarah are excited about being a monitor farm. Sarah stepped back from farm work to be full-time mum to Beau, 4, Kace, 3, and baby Jack.

“We feel privileged to have been asked, it’s going to open the gates to so much invaluable knowledge,” says Hayden.

“Bob and Jill are delighted from a business perspective, we will grow so much,” says Sarah.

The couple are unfazed by the weekly sheet they fill in. There are set headings and columns, and also room for general reports at the bottom.

After a paddock is grazed, it is walked and cover is measured using a rising plate meter, so the number of kilograms of dry matter used can be calculated.

For the first time, the farm will not be planting crops, and instead will be cutting more grass silage to supplement in summer, along with 200 tonnes of bought in palm kernel.

“We’ve heard of others doing this well, and we are looking forward to sharing this and our other results with the 1200 subscribers to the results DairyNZ compile,” says Hayden.

He describes the monitor farms results as a “discussion group without having to go along”. It would be fair to say that the trust has contributed to the support system, community spirit, and rural mental health in the Hauraki Plains. It’s definitely good to talk. 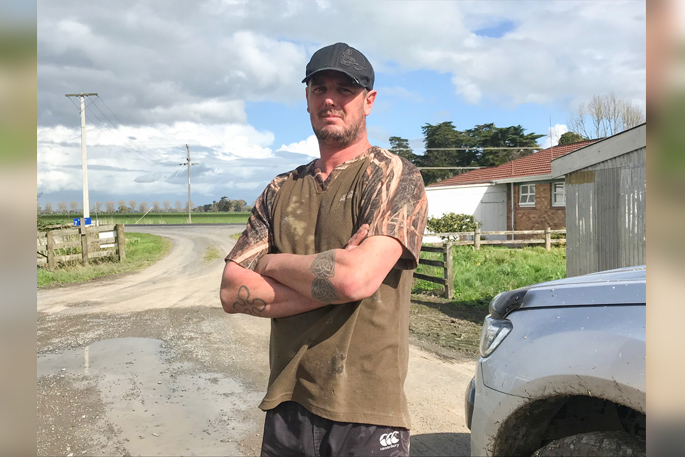