For Ngakuru organic market gardeners, Jordyn and Simon Barbour, their approach to taking on the organic farming challenge has always been through education and information. They’ve taken their time to explore making their organic farming dreams come true, and supported each other every step of the way.

Jordyn, 29, grew up on a lifestyle block in Coatesville, and Simon’s family were dairy farmers in Tirau, and later in Ngakuru. The couple met in their first year studying agricultural science at Lincoln.

Simon, 29, took a dairy farming job near Lincoln after his degree, waiting for Jordyn to finish her degree as she had taken a year out to do a course in organic horticulture at the Biological Husbandry Unit. The couple married while at Lincoln, and their first child Emma was born.

They returned to Ngakuru in 2014 to be near family for the birth of their second child Romy.

“We spent a year working on an organic dairy farm, and were considering working with my father to convert the family farm to organic status, when we had a quantum moment,” says Simon.

It came to them one day that organic market gardening was what they wanted to do.

They loved the organic dairy production system, but didn’t like that the beautiful milk became powder and was shipped around the world. The answer for the couple was to start by feeding the local community using organic principles.

“The food we produce is so toxic due to not only the use of pesticides, but also synthetic fertilisers that are contaminated with heavy metals like cadmium,” says Simon.

Of course the next step for the couple was education and knowledge. “Simon went to a Six Figure Farming workshop with gurus Jean-Martin Fortier and Curtis Stone, and came back totally inspired and buzzing,” says Jordyn.

The couple returned to Lincoln and Simon studied the same organic horticulture course that Jordyn had previously completed.

“We lived off savings and a student allowance, and sold veggies at the Farmers Market, from the plot you get allocated on the course,” says Jordyn.

In June 2017 they returned to Ngakuru, and gratefully accepted a milking job, a house and a year’s grace on the lease of some land, on Simon’s family farm.

Initial testing of the area they wanted to use revealed high levels of DDT and it wasn’t suitable for organic conversion.

The process to organic certification of the soil was started early on, with the addition of certified organic compost, organic fertilisers and trace elements, and seaweed and fish fertiliser.

“Jenny Lux, the certification manager for OrganicFarmNZ in the Bay of Plenty, has been our mentor for becoming certified.”

Simon spent the next year milking twice-a-day, setting up the garden, and scouring TradeMe for second hand tools and materials. Jordyn worked as much as she could around her small children.

The couple have planted 3m wide biodiversity strips of perennials between the garden plots. The aim is to have plants flowering year-round undisturbed, attracting and supporting an ecosystem of good insects and birds.

“If we do get an infestation of a parasite pest, there is already an established population of good predators to tackle them,” says Simon.

Simon admits they went a “bit overboard” with their first season, planting more than 40 species of vegetable, but they “learned heaps” about what works in their soil.

As well as exploring organic and environmentally friendly methods of disease and pest control, they also are working on minimum tillage.

“By disturbing the soil as little as possible, and keeping an established system, the beneficial bacteria and fungi in the soil are able to thrive keeping the soil healthy, which leads to healthy plants,” says Simon.

Alongside honing their growing skills and advertising skills, Jordyn and Simon are striving to meet their original goal – affordable organic produce.

They attend Kuirau Park Market in Rotorua, and supply a few restaurants and the Brown Owl Organic food hub. “We’re working on the content of our veggie boxes, aiming to provide a good variety of veggies the entire growing season,” says Simon.

One day they hope to use their established garden to educate and train others who also have a passion for producing delicious, organic vegetables. 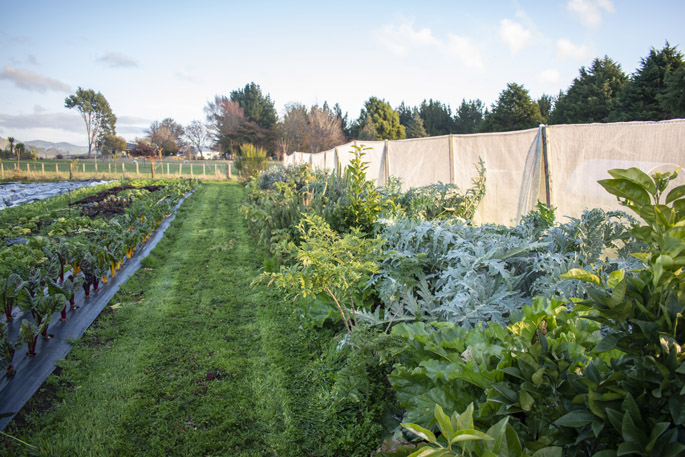