‘Rusty’ right on top of some Velvetleaf he has detected on-farm.

‘Rusty’ the velvetleaf detector dog, with his owner and trainer John Taylor, will be back in the Waikato region later this month scouring farmers’ paddocks for the invasive pest plant before maize crops get too high.

Currently, the border collie is the only dog in New Zealand that is deployed to detect velvetleaf – and John says he’ll retire Rusty from the job when he turns 10 soon – but he hopes to train his other dog ‘Wink’ to take up the position.

John says Wink is currently trained to detect other weeds. Asked if it was difficult to train a dog to detect the pest plant, John says ‘No’.

“The first day I spent two-and-a-half hours training Rusty and he was detecting it. So we just refined it, by doing a lot of work with the Ministry for Primary Industries.”

According to Waikato Regional Council, velvetleaf is considered one of the world’s worst cropping weeds and has spread to properties in the region via unclean machinery, and infested maize crops, maize silage and maize grain.

Heidi Pene, a biosecurity pest plant officer contracted to WRC, says since John trained up Rusty a few years ago the duo has been coming north from their Invercargill home to the Waikato a couple of times each year – plus other areas of New Zealand –  to detect velvetleaf on farms.

“Rusty has been trained to detect velvetleaf in fodder beet, and in maize crops and pasture.

“At this time of year – from December to January – we are taking Rusty to maize crops around the Waikato, where maize is just starting to emerge so he can detect the pest plant at the seedling stage,” says Heidi.

“This gives farmers the opportunity to do a post-emergent spray with the right herbicides if they need to before the maize gets too big.

“So when maize becomes full-grown velvetleaf tends to get really large as well and you have got no chemical option to rid of it – it involves walking rows and physically pulling the plants out.

“So getting on it early is the big key to management.”

The other thing John and Rusty do is go to properties that don’t where know whether they’ve got velvetleaf or not – but they might be at risk.

“For example, they’ve had a harvester that’s gone to their property from an infected property and we’ve done some tracing, or they’ve received silage from somebody who has velvetleaf in their maize.

“And Rusty can detect it far better than what we can at this stage,” says Heidi.

John says how Rusty goes about detecting velvetleaf depends on the wind. “I work the wind and the day – it just depends what the weather is like.”

John, a retired electrician, says he came to train Rusty to detect velvetleaf after hearing about the pest plant on the radio. “I had a dog that I was training to be a LandSAR Search and Rescue dog. I resigned from that as it didn’t work out. But at that point the velvetleaf incursion was coming into my region – and I thought: ‘I wonder if a dog can find it?’.”

Heidi says John and Rusty visit about four to five farms per day, depending on how big the blocks are to walk. “If it’s a really stinking hot day and it’s a lot of walking, they may only get around three.

Heidi says feedback from farmers who have ‘employed’ John and Rusty so far is that they do appreciate it.

“We do give them the option – it’s not something they have to do. We usually ring them and ask would they like a detector dog to come check whether they’ve got velvetleaf seedlings emerging yet and some will ring us wanting to know if it is time for them to spray.

“Usually, they are very receptive and interested and fascinated with Rusty and what he can detect – compared to what we can with our eyes.”

Heidi says to keep velvetleaf from spreading further in the Waikato, she advises landowners and farm contractors to be vigilant about ensuring machinery is clean when entering and leaving a property, and to check any suspect maize silage and crops.

Find out more information at: www.waikatoregion.govt.nz/services/regional-services/plant-and-animal-pests/plant-pests/velvetleaf 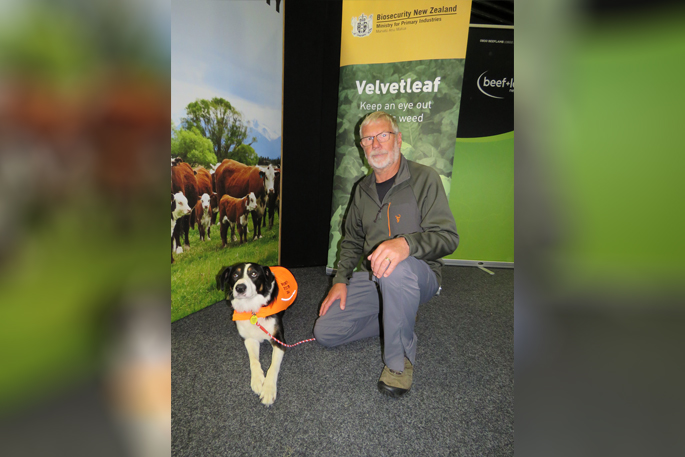