When Paul and Rachel Mudge took over 50 acres at Cambridge six years ago, they stocked it with Dorper sheep and experienced nothing but problems.

Footrot, flystrike and regular lambing issues became apparent, so they did their homework and changed the flock to Damara sheep.

“I did a lot of research on Damara sheep and everything I learned has turned out to be true,” says Rachel, who with Paul and their two children Tate, 12, and Luciana, 9, live on the property and breed and sell Damaras.

“They are the ultimate easy-care sheep – no shearing, no crutching, no docking – and they’re resistant to flystrike. They flock together well, which makes them easy to handle and they are great mothers.

“They are intelligent too. There’s plenty that we like about them – as well as the lack of health issues that plagued our other sheep.”

Back then Paul also noticed they were the most expensive sheep on TradeMe. “So we decided they must be worth breeding.”

The Damara is originally from Eastern Asia and Egypt. The breed then moved down to Namibia and Angola and for many years the sheep were in an isolated region of Namibia, thus have remained free from the influence of other breeds.

They put excess weight into their tail, which is similar to how a camel stores fat in its hump – this means their meat remains lean and is a healthier options to eating lamb and mutton.

“We’ve been breeding them for five years now. It was quite challenging to originally get a flock together; we bought ewes from all over the country,” says Rachel. “Now we have 70 ewes and three rams.”

To introduce more bloodlines into their flock, Rachel and Paul are bringing in 100 straws of semen from Australia. The sheep will have their cycles synchronised and be put up for Laparoscopic Artificial Insemination.

Rachel usually has more orders for weaned lambs than she can fill. They mainly sell to people on lifestyle blocks because they like the low maintenance nature of the breed, and the low fat meat it produces. And people come from all over the North Island to buy Rachel and Paul’s sheep.

Despite the fact that Damaras are usually excellent mothers, there is still potential for something to go wrong with the mother-baby bond and the Mudge family have one orphan they’re taking care of.

‘Moa’ was a twin who slid down a hill and under a fence as soon as she was born. “Mum wasn’t distressed about this. In fact, she appeared to think that she only had had one lamb, so I decided to feed it,” says Rachel.

She milked the sheep to get colostrum for the first two days and now feeds the lamb a yoghurt culture she makes herself. “Orphan lambs are prone to bloating after a large milk feed, which allows unfavourable bacteria to grow. You don’t get these problems with yoghurt.”

And so Rachel, a contract agribusiness consultant, and Paul, a Hamilton primary school teacher, now enjoy breeding sheep on their land, which also gives them more time with their young family.

“Everyone asks us why we moved from Raglan. I guess people can’t understand why you’d move away from the beach, but we’d outgrown our six-acre lifestyle block there,” says Rachel. “We love it here in Cambridge, we live in the country but are close enough for Tate to bike to school.”

“And running the farm and breeding Damaras meant I could reduce my hours – now we have more time together,” says Rachel. 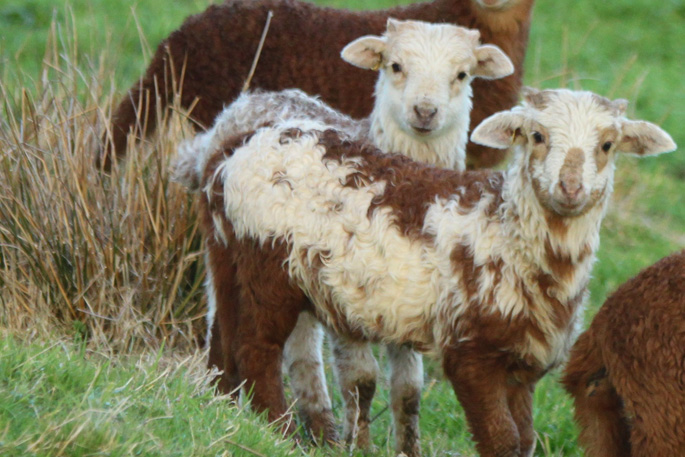