Attendees at Maui Milk’s Open Day at Waikino Station didn’t just experience sheep milking first-hand, they also heard of the opportunity and a suggested framework to be pioneers and convert to an ovine dairy operation themselves.

Waikino Station, which overlooks Lake Taupo, opened its gates on November 5 to potential sheep dairy farmers to see the operation in full swing and hear about the current programme direct from the Maui Milk team.

Everything from the finer points of milk production to genetics and breeding were covered.

But the day began with action, with sheep milked in the station’s 64-bail shed under the watchful eye of onlookers from two viewing platforms.

Maui Milk chairman Paul McGilvary welcomed everyone to the site then general manager Peter Gatley gave some background on the operation. “This is predominantly a genetic programme. We invest in imported semen and embryos, laparoscopic Artificial Insemination, DNA parentage testing, electronic milk meters and data analysis. We do this so that commercial farmers don’t have to. The biggest influence on genetic merit will be their source of sires, and those rams are what we will supply.

“The aim is to have lambs increasing in weight by 200g per day. This might not sound like much, but the goal is to get them weaned at 16kg, to be 50kg for mating and reaching their first milking at 60kg, after lambing, in this cycle.”

In terms of grazing, Peter says they’ve had a lot of success with lucerne aiding their achievement of the target weights. “We do supplement lambs with pellets but the only hard feed during lactation is whole grain maize seen in the feed buckets in the shed during milking.”

As with many Taupo-based farming operations, Peter says the balancing act of keeping within nitrogen levels was a challenge, but one well-addressed by the team. Being so close the lake, cattle are used sparingly, and only to control pasture off the milking platform.

Geneticist Jake Chardon provided detail on genetic make-up of the lambs. “We bring in 2500 straws from French progeny tested Lacaune sires each year.”  This helps the team continue breeding lambs to the best milking potential, while improving other areas such as temperament and udder conformation.

Jake also talked of Maui Milk’s journey to creating the Southern Cross breed by combining Lacaune, East Fresian, Coopworth and Awassi breeds – thought to be a world-first for sheep genetics.

“We’re delighted to have the Southern Cross officially recognised as a new breed by the NZ Sheep Breeders Association.”

Peter also gave a rundown on conversion options, and what the team would consider from those keen to join Maui Milk as suppliers. He believes with many smaller dairy operations around the Waikato, there is plenty of scope for new conversions.

Criteria for conversion include location – the closer to Hamilton the better.

Peter mentioned ewes and rams were available and the preference was “for participants to have the ability to milk 700 ewes at a minimum”.

Then Danone’s Leon Fung described his company’s working relationship with Maui Milk, saying his team is keen to see the operation grow, naming the Waikino Station and any possible converters from here as “pioneers”.

A Q+A followed, focused on queries about grazing, genetics and whether a share float will happen – which the Maui Milk team says isn’t on the horizon. With the opportunity outlined, and Danone’s support confirmed, now it’s just a matter of who will throw their hat in the ring to take on the challenge. Peter says the first signings had taken place and several new milk suppliers are expected to be in operation by spring 2020. 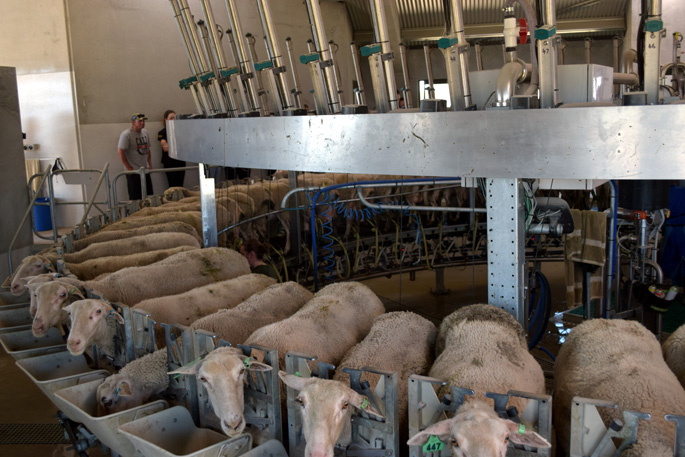