Roto-o-Rangi drystock farmer Jim Gregan came to tractor collecting relatively late in life compared to some. However, he admits that when he started collecting in 2004, he went into it “in a big way”.

Jim’s dad had David Brown tractors on the family’s dairy farm, and Jim decided to collect them. He set himself an ambitious goal, aiming to own every David Brown model manufactured between 1939 and 1987.

Jim’s most prized tractor is a 1956 David Browne 50D, a CKD – Complete Knock-Down – unit that was assembled in New Zealand. ‘Dave’, as the tractor is fondly known, was one of two that were shipped over together.

“The model has no hydraulics, which was a downfall, but now there are so few that they are collectible.

“They are one of the most sought-after vintage tractors in the world.”

With a four litre, six-cylinder engine, the 50D was designed as a pulling tractor. ‘Dave’ ploughed paddocks in Canterbury until his retirement in the 1980s, when he was parked in a shed for the next 20-odd years.

He was bought around 2000 and the new owner drove him to Waiuku during four days. “Bearing in mind ‘Dave’ has a top speed of 12m/hr, that was a lot of hours on the road,” says Jim.

Jim had been on the lookout for a 50D for some time and immediately picked up on the impending auction. In an attempt to secure the tractor, he tried to put in a pre-auction offer, but it wasn’t enough to stop the auction.

“There was a lot of interest in it, especially from the UK, where they are very sought-after.”

Jim had to fight hard to get Dave but he got to take the coveted tractor home in the end. “Let’s just say there was a bit of competition at the auction.”

Jim has been Dave’s proud owner for the last 12 years. He’s in great condition, with gleaming ‘Hunting Pink’ bodywork, and running like a dream.

Jim regularly takes the tractor and others in his collection to agricultural shows, tractor treks, and the annual Fieldays, where they are very much admired. 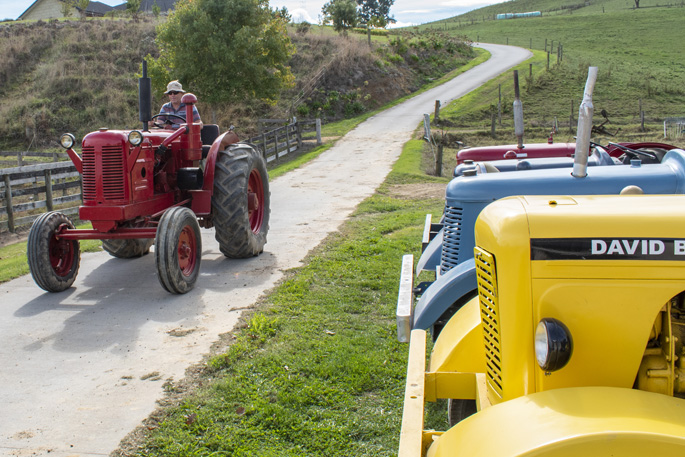