Two quite different fly species produce most of the blowfly strike in New Zealand.

The European Green Blowfly (Lucilia sericata) is important because it is a parasite of temperate regions and can survive for most of the year in New Zealand. It attacks susceptible parts of the body, such as wounds, dags and urine stained skin. It can complete its lifecycle in other food sources, such as road kill. Although the eggs are readily killed by heat and the soil dwelling pupae cannot hatch below 15°C, these flies can survive in the wide variety of climatic conditions found in New Zealand.

The Australian Green Blowfly (Lucilia cuprina) in contrast, does not need an ‘excuse’ to attack. It will lay eggs on a completely clean-fleeced sheep, with no wounds or dags, for instance ‘shoulder strike’ in a clean sheep. However, the AGB is a tropical fly in origin and cannot survive and complete its lifecycle in such varied climatic conditions as EGB. Typically, ‘tropical’ (i.e. moist and warm) conditions are required.

These flies normally start breeding in spring and reach epidemic proportions during warm humid weather. This is generally between November and March, although fly season can extend from October to June. The blowflies lay their eggs in the damp wool and maggots can start hatching within a day (eggs will hatch in just 12 hours) and then start to eat the sheep’s flesh. Flystrike can occur rapidly, and sheep should be checked at least once a day in hot weather. 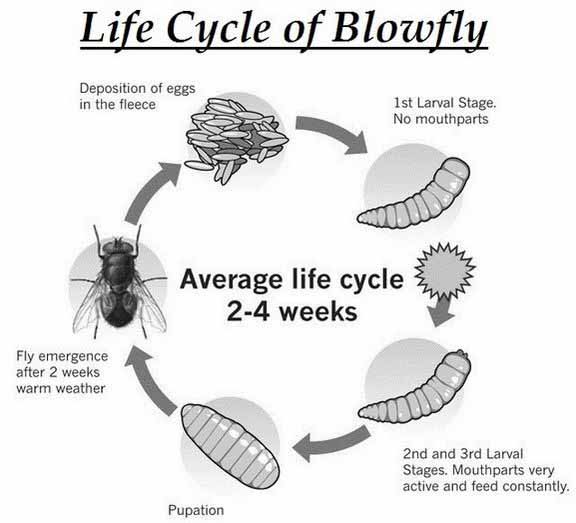 Sheep blowflies cannot lay eggs until they have consumed a protein meal. They then mate and the female flies develop eggs. Depending on the size of the female, batches of up to 200 eggs can be laid per ovarian cycle. Sheep blowflies can live for over a month in the field. During this time three batches of eggs may be laid.

When a susceptible sheep is found, the preferred oviposition site is located using taste receptors on the feet, mouthparts and finally the genitalia. The eggs are susceptible to desiccation, but there is safety in numbers. Ovipositing females produce a contact pheromone to entice other females to lay at the same site. Consequently susceptible sheep may have very large egg masses laid on them by dozens of flies.

Ideal conditions for the blowfly involve warm, humid weather. They do not like;

Areas most commonly affected by flystrike are:

- around the tail end

- around the pizzle (prepuce/penis) in males

- between the ears of rams after fighting and head bashing.

Best practice management is to have all sheep shorn and with clean bottoms in the warmer months. This reduces the attraction for flies, which seek damp smelly wool in which to lay their eggs. Dirty bottoms are usually due to high worm burdens and/or changes in feed quality.

Affected animals can be seen nibbling their wool, stamping their feet and twitching their tails before becoming depressed. Dark patches may also be seen on white fleece. Colonies of maggots may be difficult to find so the wool should be systematically parted and checked.

Chemical prevention six weeks post shearing is timely, as the wool length will hold the insecticide. However, it can be applied earlier as required. Earlier treatment approaches involved organophosphate (OP) dips and showers, but these rapidly became ineffective due to fly resistance. Current treatments involve using high-powered jetting races and Insect Growth Regulators (IGR). High powered jetting races work very well, but if sheep move through too quickly then the duration of activity may be reduced. IGRs work by interrupting the lifecycle of the maggot stages, preventing them from forming or casting their external skeleton.

In the early 2000’s, resistance to some IGR products was identified in parts of the country. Resistance is thought to have developed due to continued use of these sole products for all fly and lice prevention and treatment. While these products are still effective for lice treatment, their use for prevention of fly strike is limited. It is now recommended that to control future resistance we should consider blowflies and lice separately and use different products for prevention and treatment of clinical cases. Note: Long acting products tend to have longer meat withhold periods, so for lambs approaching their finishing weights careful attention needs to be paid to the product used. Feel free to contact your local vet clinic for more details.