Why denying the obvious won’t work

Below is a recently taken photograph of a Functional Fertiliser client’s property from 2500ft.

The move to organic certification was made in March 2013 with all required nutrients applied annually. 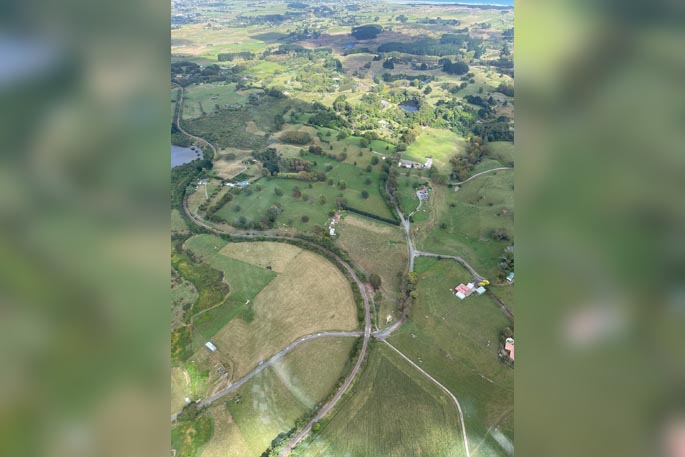 Without accurate rainfall data it’s not possible to know whether it’s been drier or wetter than normal recently, however what is important is the difference in colour between the property and neighbours.

The farm is situated close to Forest Lakes just north of Otaki, an area where locals enjoy walking and over the past 10 years the owner has received many compliments and often been asked the question: “why is your place so much greener than the neighbours?”

Under the current conventional model of excessive water-soluble nutrient propped up by unsustainable synthetic nitrogen applications many farmers will not survive the coming crisis.

Carbon positive and high levels of pasture and animal production are compatible however will only be achieved when the current models are dismantled.

The new system will be based on the awareness and understanding of the interconnectedness of soil, plant, animal and human health.

Soils are the basis of the new paradigm and until there is a focus on creating healthy biologically active soils that necessarily grow more feed of higher quality, there will be a continued reduction in farm profitability.

The models used to justify the existing growing systems have a flaw. That flaw is calculating plant protein by measuring the nitrogen content and multiplying by 6.25. The number reached is a measure of crude protein and a poor indicator of actual protein.

Plants containing high levels of crude protein are unacceptable to animals unless balanced by a high energy and fibre supplement.

Animals grazing pasture grown on truly healthy soils containing all necessary elements are clean, docile, and gain weight at a rate that most find unbelievable.

When the pasture is grazed after reaching the top of the rapid growth phase it is naturally high in full protein, and the losses of methane and nitrous oxide are of little if any consequence.

Plants develop a stalk and seed head in response to stress, which over summer is usually due to a lack of moisture, and high soil temperatures.

The pasture highlighted has a deeper root structure and is therefore able to access both moisture and nutrient from a greater depth.

The difference in colour is in part due to the plant’s ability to convert sunlight to protein and energy very efficiently. Because there is less stress plants stay leafy and digestible for longer.

The highlighted property was part of an AGmardt funded study that showed it to be actively sequestering carbon, lowering atmospheric carbon dioxide levels.

The property is positive on every environmental measure due in large part to astute and sympathetic daily management.

Every year there is the potential to grow more pasture and produce a greater quantity of meat, however that is at the discretion of the owner.

It provides a blueprint that can be used for far larger properties and ultimately the entire pastoral farming industry. The owner extends an invitation to the scientific fraternity, and politicians, to visit, examine, and measure every aspect of the operation. For more info please call Peter on: 0800 843 809.