Is our food still thy medicine? Part 2

In last month’s column we began to discuss if our food still thy medicine, with a growing number of reports in recent years concluding that today’s foods are not as nutritious as those from the past.

Let’s look at some research that has measured the selenium content of common foods grown in the United States’ upper Midwest.

One such study is by AS Kecka and JW Finley titled: ‘Database values do not reflect selenium contents of grain, cereals and other foods grown or purchased in the upper Midwest United States’. (Nutrition Research 26:1 17-22 Jan 06). A detailed summary of this study is available without charge on Science Direct. This study has reported remarkable variations in selenium content for many foods.

For example, the selenium content for wheat flakes varied 72 times in their samples, 57 times for wheat itself and 11 times for beef. In particular, the study found that the values they recorded bore little resemblance to the figures provided by the United States department of Agriculture’s National Nutrient Database for Standard Reference. It was concluded that the differences were so great the reference base was of little value. One can only surmise that the same could be true for the nutrient content of many other foods in many other countries.

To further investigate nutritional decline, 10 common fruits and vegetables were examined for their calcium, magnesium, and potassium content. 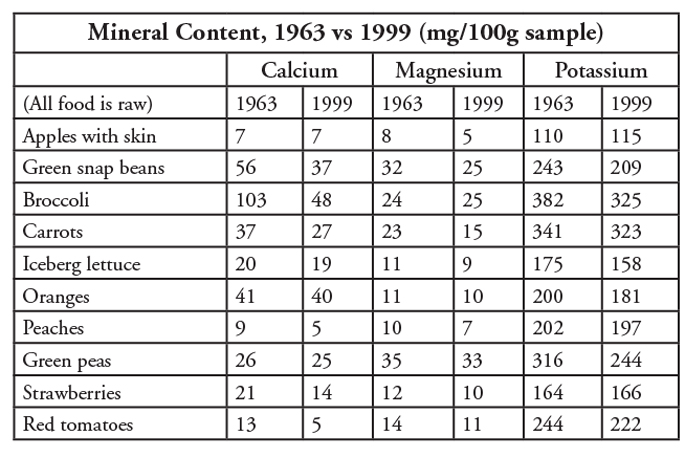 Today’s food produces 10-25 per cent less iron, zinc, protein, calcium, vitamin C, and other nutrients. Researchers from Washington State University analysed 63 spring wheat cultivars grown between 1842 and 2003 and found declines of 11 per cent in iron, 16 per cent in copper, a 25 per cent decline in zinc, and 50 per cent in selenium. The 2006 revised USDA food pyramid nearly triples the daily recommended servings of fruits and vegetables.

Chief scientist Charles Benbrook of The Organic Centre (Boulder, Colorado) says the food pyramid revision is directly related to the decline in the nutritional content of fresh food. “We’ve developed farming systems that grow a lot of plant matter and creates a lot of mass, whether that’s starch or fibre or pulp.

“We have not developed equally effective technology methods to enhance the fertility of the soil.  “The capacity of all essential micronutrients in the soil needed for plants to manufacture vitamins and antioxidants that make food good for you, has not kept up.

“That is why we are now seeing these declines in the protein quality and content of food, and in the vitamin, mineral and antioxidant levels. Less nutrient-dense foods, coupled with poor food choices, go a long way toward explaining today’s epidemics of obesity and diabetes.”

Besides being severely deficient in almost all trace elements, it now turns out that our daily food has also become severely nutrient-deficient, and today’s vegetables have lost most of their vitamins. Just empty carbohydrates and calories are left for us to eat. If we add to it the contamination of our food with agricultural poisons and commercial preservatives, we end up with something we should be avoiding at all costs. The alternative is to eat biologically, regeneratively or organically-produced food with no chemical inputs.